The M510 Siegework/Ultra-Heavy Mobile Anti-Aircraft Weapons Platform, also known as the Mammoth, is a very large UNSC vehicle that appears in Halo 4. It resembles a larger and more mobile Elephant. It is a mobile command and control unit or forward operating base. The Mammoth can transport and deploy smaller vehicles like the Warthog or the Mongoose as well as infantry units.[3]

As the UNSC Infinity was being pulled into Requiem, several of the ship's Mammoths were violently slammed into each other.[4] Later, a Mammoth was deployed to help with the blow through operation to help destroy a Gravity Well Generator keeping Infinity in Requiem. This Mammoth was heavily damaged in the operation.[3]

The Mammoth is the largest land vehicle of the UNSC known so far, quadrupling the size of the Elephant in length, and can carry multiple Warthogs and Mongooses. The Mammoth is a mobile base on wheels. It has six heavy duty wheels, cargo doors at both ends for the deployment of vehicles, and sports two winches among other practical loops and hooks on its front for multiple uses. The Mammoth is also three stories tall; the lowest level is used as a vehicle garage, while the second level is where the command center of the vehicle is located, and the topmost level is the outer deck exposed partially outside for observation and combat and the location of the MAC and side-mounted rocket turrets.

The Mammoth's primary armament consists of a MAC (referred to as a "mini MAC" in dialogue) on its top, near the rear of the vehicle. The Mark 2457 MAC fires a 35 centimeter round and is powerful enough to destroy a Particle Cannon in one shot, however it requires the use of a Target Designator. Other weapons onboard the Mammoth include two M79 Multiple Launch Rocket System turrets on the front right and left sides. There are also several ammo crates, enough to arm several squads of Marines and/or Spartans, in the vehicle garage and command center. 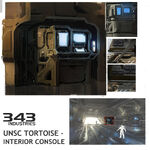 Concept art of a computer terminals inside the Mammoth.

Concept art of a weapons rack inside the Mammoth.

A render of the Mammoth.
Add a photo to this gallery

Two Mammoths sliding across one of the Infinity's hangar bays, in The Commissioning.

An upper view of the Mammoth.

John-117 firing one of the Mammoth's rocket turrets at the Remnant forces.
Add a photo to this gallery

Retrieved from "https://halo.fandom.com/wiki/M510_Siegework/Ultra-Heavy_Mobile_Anti-Aircraft_Weapons_Platform?oldid=1806606"
Community content is available under CC-BY-SA unless otherwise noted.