“I don't keep it loaded, son. You'll have to find ammo as you go.”
— Jacob Keyes after giving his pistol to John-117

The M6D Personal Defense Weapon System,[3] otherwise known as the M6D Magnum Sidearm, is a United Nations Space Command sidearm and is one of the variants of Misriah Armory's M6 handgun series.

The M6D Pistol is an up-sized UNSC handgun issued to Navy officers. This model has been upscaled for use by SPARTAN-IIs in MJOLNIR armor. Even though the Spartan issue pistols are larger than the standard-issue variants (~117%) they can still share magazines.[4] The M6D is a semi-automatic, recoil-operated, magazine-fed, large-bore handgun that is controllable even during rapid fire, although at the cost of accuracy.

In-game, the player can hold the trigger down, and the weapon will fire repeatedly without additional pulls of the trigger.

Operators can achieve an effective rate of fire of 3.5 rounds/sec or 210 rounds/min. The weapon is very accurate out to its maximum effective range. This accuracy allows incredibly precise target engagement at long range. This, combined with its decent damage against Energy Shields, makes it a viable option when faced with shielded opponents, such as Elites. It is, however, even more effective against unshielded infantry targets, being able to kill most targets in one shot to the head or two to three shots to the body.

The M6D is a semi-automatic weapon - this principle of weapon operations means that the weapon will cock itself after every shot due to recoil and will continue to do so with every trigger pull until the magazine is empty. The M6D also uses the short recoil principle; it uses the force of the recoil to eject the spent casing, chamber another cartridge, and re-cock the weapon so that it may be fired again.

Before the first round can be fired however, a round must be chambered. This is done by inserting a loaded magazine into the grip of the weapon, and then by pulling the slide back completely and letting it slingshot forward, which takes a round from the top of the magazine and carries it into the chamber.

To reload, the empty magazine must be removed with the magazine release button located on the grip and a fresh magazine inserted. Once the fresh magazine is inserted, the slide is allowed to return to its normal position by the operator. There is no need to re-cock the weapon. Cocking is only necessary when chambering the first round when bringing the weapon out of "safe" mode - safety on, uncocked, and unloaded.

The M6D is a very basic pistol compared to most 26th century technology. It is a large handgun, having an overall length of 26.7 cm and possesses a rifled barrel, improving accuracy by spinning the bullet. It is issued in a hard chrome finish color and operates like most contemporary pistols. It has rear sights but it does not have a forward sight blade, which is replaced by the smart-link scope. It features a KFA-2 2x optical, smart-linked scope. This scope links directly to a user's HUD or a Marine eye piece. It also has a large grip guard, which helps prevent the user from dropping it and a chrome barrel which helps prevent corrosion.

The M6D uses 12.7x40mm M225 SAPHE (Semi Armor Piercing High Explosive) magnum loads. These rounds have a jacket of copper or cupro-nickel around the projectile while the projectile itself is hollow and filled with an explosive compound and a delayed-detonation impact fuse. When the round impacts a target, the jacket will initially help the projectile maintain its shape, allowing it to travel into the target before detonating almost immediately after impact, causing massive tissue damage and system shock.

Semi-armor piercing rounds are more effective against infantry targets as compared to armor piercing rounds due to the massive KE dump and catastrophic system damage caused by internally-fracturing rounds, and have the added bonus of posing less risk to friendlies and noncombatants in the vicinity of the target. The explosive properties of the rounds also render them decently effective against personal shielding systems and are capable of damaging lightly-armored vehicles.

The M6D PDWS is one of the UNSC's most trusted combat pistols. It is very accurate, allowing for successful engagement at any range below 122.7 meters. It also does a considerable amount of damage against both shielded infantry and flesh, as it fires 12.7x40mm M225 SAP-HE rounds. The large bullet and cartridge size yields a large amount of kinetic energy, enough to quickly deplete any form of energy shields.

Its semi-armor-piercing ability, combined with the high kinetic energy allows the bullet to penetrate most physical armor, after which its high explosive core detonates. This means it is capable of killing an Unggoy in one shot and a Sangheili in 5 shots on average, 3 to down the shields and 2 to finish it off. In multiplayer it can deplete a player's shield in 3 shots, and if the last shot hits the opponent in the head, kills them.

Although the M6D has many advantages, the weapon does have a few weaknesses. A person using the M6D must be a good marksman, to compensate for recoil on follow up shots. The pistol can hit a target at long ranges; however it cannot kill or even impact a target at a distance greater than 122.7 meters, although a sidearm should not be used at those distances unless in an emergency.

In Multiplayer, players use the M6D as the weapon for any situation. In the PC version of the game, it is the best all-around weapon, except in situations requiring vehicle killing or CQB power. It is capable of killing a fully shielded player in three shots to the head. The pistol also cuts down the usual strife that surrounds sniper rifles; a player won't necessarily kill their teammates for the S2-AM when they have a mid-range weapon with a scope.

Front and Back view of the M6D.

An in-game profile render of the M6D.

The M6D laying on the floor of a type of rock surface.

A close up view of the M6D. 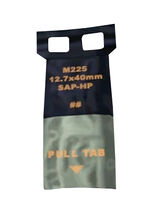 The ammunition pack for the M6D.

John-117 firing an M6D in a beta build of Halo: Combat Evolved.

The M6D in the Halo 2 multiplayer map Tombstone.

The scope of the M6D in Halo: Combat Evolved.

First-person view of the M6D in Halo 5: Guardians.

Side view of the M6D in Halo 5: Guardians.

The M6D being held by a Spartan in Halo 5: Guardians.

The M6D being fired by a Spartan in Halo 5: Guardians.

The M6D's melee in Halo 5: Guardians.
Add a photo to this gallery

The weapon's REQ Card in Halo 5: Guardians.
Add a photo to this gallery