The M808B Main Battle Tank, commonly known as the Scorpion, is the most common armored fighting vehicle employed by the UNSC during the Human-Covenant war, it is used in operations requiring heavy firepower or an anti-vehicular platform. Combining firepower, resilience and mobility, the Scorpion has proven itself formidable and earned the respect of friend and foe alike.[1][3][7][8]

The Scorpion may not be the most powerful or the fastest of the UNSC's fleet of main battle tanks, but for the most part, it represents the best possible balance between mobility and firepower.[9] Indeed the vehicle's prominence among the UNSC armed forces is due to its low production cost, transportability, and overall firepower.[1] Ceramic-Titanium armoring makes it almost invulnerable to small-arms fire[10] and easily shrugs off normal ballistic and plasma weapons, while anti-mine software and electronics provide additional protection.[3] The Scorpion has a range of 750 kilometers[3] and utilizes a four-track design, each mounted on an independent, computer-controlled suspension system,[7] which allow for deft maneuvering around large debris and other battlefield obstacles.[3] The tank also features a small crew size, one operator and one machine gunner, so long as they are equipped with Neural Interfaces; if they are not then an additional gunner is required.[3] While important material and VIPs can be crammed into the main cabin, up to four soldiers can safely be transported on the tread pods,[3] though the use of these "jumpseats" is normally reserved for emergencies.[10]

The Scorpion's main weapon, mounted on a 360° rotating turret, is the M512 Smooth Bore High Velocity Cannon which fires a 90mm tungsten shell, including S1 Canister Shells. Though this weapon can have difficulty penetrating the armor of some heavy vehicles,[8] it is capable of disintegrating most targets in a single shot[1] or gutting a Wraith in two to three, depending on where the shots hit relative to the target's hull.[3] For additional offensive power some Scorpions will instead mount a 105mm cannon.[11] The M247T Medium Machine Gun serves as the tank's secondary weapon, delivering 7.62mm armor-piercing rounds with speed and thoroughness.[1] It can be mounted co-axially or on a separate pintle-mount depending on the model.[3]

As time has progressed, the Scorpion has been modified into more than a half-dozen different versions, however despite these modifications the Scorpion's psychological aspect and versatility remain unchanged.[3]

The Snow Camouflage Scorpion MBT as seen in Halo 3.

The Scorpion MBT as seen in Halo Wars.

Rear view of the M808 Scorpion in the Halo: Reach Multiplayer Beta.

Frontal view of the Scorpion MBT as seen in the Halo: Reach Multiplayer Beta.

The Scorpion MBT as seen in Halo: Reach. 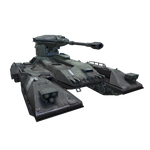 A render of the Scorpion as seen in Halo: Combat Evolved Anniversary.

The Scorpion MBT as seen in Halo 4.

The Scorpion MBT as seen in Halo: Spartan Assault.

A view of the Scorpion's turret and emblem in Halo 2.

A rough model of the Scorpion, used in background battles. 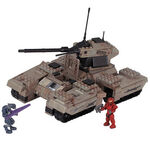 Retrieved from "https://halo.fandom.com/wiki/M808B_Main_Battle_Tank?oldid=1567031"
Community content is available under CC-BY-SA unless otherwise noted.