The M831 Troop Transport,[1][3] abbreviated as M831 TT and commonly known as the Troop 'Hog, is a United Nations Space Command ground transport vehicle based on the chassis of the M12 Light Reconnaissance Vehicle.

The M831 is first and foremost a transport used to quickly ferry troops from one location to another. While obviously an important piece of UNSC field equipment, the M831 is rarely committed to combat because of its equally obvious lack of weaponry, with the rear bed of the vehicle featuring an expanded seating compartment. In its most common and optimal configuration the M831 has a transport capacity of four passengers, though with others it is possible to seat up to ten.[1]

While uncommon in this role, the M831 can be used for offensive purposes. When properly armed the vehicle's crew and passengers can cover nearly all angles of fire at a given time, giving it a type of lethality not seen in other Warthog variants.[1]

The Troop Transport relies on its passengers for defense and offense. Because of this, it is normally considered far less powerful than its counterparts. The usage of a troop compartment instead of a turret is both an advantage and a disadvantage: more allies will die should the vehicle be destroyed, but multiple targets can be counterattacked at the same time (albeit with less overall force).

The M831 Troop Transport vehicle was originally slated to be in Halo 2 along with two other Warthog variants, the Snow Warthog and the Jungle Warthog. Time constraints prevented Bungie from adding it to the game; the only new variant that made it into Halo 2 was the M12G1 LAAV "Gauss" Warthog. In Halo 2, the Troop Transport Warthog's personnel compartment seems to use a roll cage with roll bars similar to that of modern vehicles.

The M831 TT was sighted in the Halo 3 E3 2007 Trailer. In the final game, it can be spotted in multiple levels, including Tsavo Highway and The Storm.

The M831 TT returns in Halo: Reach, first viewable in the cutscene Noble Actual, then later in the level, ONI: Sword Base, making a scripted drive before being destroyed. If playing on Co-op, then an overturned Troop Transport appears and is drivable. It is still impossible to ride in the rear rollcage.

A Troop Transport Warthog in Tsavo.

The Transport Warthog in Halo: Reach.

Another view of the M831 in Reach, note the additional light over the driver seat. 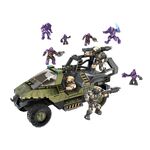 A Megabloks Troop Transport Warthog
Add a photo to this gallery

Retrieved from "https://halo.fandom.com/wiki/M831_Troop_Transport?oldid=1826244"
Community content is available under CC-BY-SA unless otherwise noted.