HE-DP stands for High-Explosive Dual-Purpose. This designation means that it is designed to be effective against infantry and lightly armored vehicles. AP FRAG can be viewed on the Halo: Combat Evolved M9's olive casing. AP designates "anti-personnel," indicating the weapon's intended use.

The grenade has a hard metal casing, with a frangible design meant to break apart into small, regular shards. This surface creates consistent, reliable fragmentation patterns for the grenade, rather than randomly rupturing along metallurgical faults. The grid-shaped casing houses a charge of high-explosive fitted with a mechanical primer. When the charge detonates, it shatters the grenade's casing, sending shrapnel flying away at high velocity.

In all Halo games, the grenade must first hit the ground before exploding. In Halo: Combat Evolved, the grenade would not detonate mid-air. In Halo 2 and Halo 3, it would bounce and explode mid-air a moment after bouncing. But in Halo 3, if the grenade was thrown up, and hit a surface going up, it would not explode until it hit the ground. This presumed to be a safety feature, ensuring the grenade would only explode after striking a surface after being thrown, and not in the user's hand. This may explain the lack of a "spoon," or handle, on the Halo 2 and 3 M9 HE-DP grenades. The spoon is a device that is gripped while the grenade is being primed. It ensures the grenade will not explode until after the spoon is released, as it starts the fuse of a grenade as it flies through the air after it is thrown. In Halo: Combat Evolved, the spoon would have negated the need for this Halo 2 safety feature.

The grenade is primed with a small button located on the "handle," quite unlike modern fragmentation grenades which use a pin that must be pulled before priming.

In Halo: Combat Evolved, the fragmentation grenade left a white smoke trail behind it when thrown and would create sparks when it landed after being hurled, indicating that the grenades fuse could be a gas-release system. The grenade would be primed with pressing a button, release gas when in mid-air and then detonate when landing in a static position. This would make the grenade's detonation system depend on placement rather than timed detonation.

In Halo: Combat Evolved and Halo 2, four of these grenades may be carried at a time. This was reduced to two in Halo 3 due to the presence of four grenade types, but increased to three in Halo 3: ODST and in Halo: Reach the player is again able to carry four grenades, but only if the settings are changed to carry this amount.

The M9 HE-DP grenade is best used when enemies gather together in tight groups. A well thrown grenade placed in the middle of a Covenant lance will kill most of the Grunts and damage an Elite's shields. With the shields damaged, players can easily kill the Sangheili. In addition, frag grenades should also be used against a group of Jackals, as their defense shields will not protect them from the blast. In Halo: Combat Evolved, the only Elites that can be killed with one detonation are Stealth Sangheili, with its downgraded shields. The M9 HE-DP grenade is also commonly used against light-armored vehicles. With luck and good aim, some enemies like Grunts can be stuck with the frag, where it lodges between the methane tank and the Grunt itself.

A multipurpose weapon, the fragmentation grenade can be used in corridors or to flush out occupants. The blast will severely damage player's energy shields allowing for easy follow up attacks. One frag grenade is considered as either aid in combat for quick damage before the fight starts, or as a tool to finish off an unshielded opponent. A grenade can be bounced off of a wall to ambush an enemy or kill your ambushers. Two frags is where this grenade becomes a killer all on its own. If timed correctly, grenades can be planted in the path of an oncoming vehicle. Most drivers will not be able to react quickly enough, and will most likely be caught in the blast. Lighter vehicles will be easily flipped by concussive blast.

Another good multiplayer tactic is to throw one at the player's feet while back-pedaling when an enemy is charging at the player. When the grenade detonates, the other person should be in the blast radius of the grenade and have their shields damaged or be killed by the blast. This is useful to fight oncoming vehicles, preferably light-armored vehicles like Ghosts, Mongooses, Warthogs. Frags are also very handy to kill opponents when used in conjunction with explosive objects. Destroying Fusion Coils or Plasma Batteries with a grenade means the grenade's damage plus the explosive's damage would hurt or kill the target more effectively than a single frag grenade.

The fragmentation grenade is also a good finishing tool since it is powerful enough to take down a Spartan's shields or finish off a wounded Elite. Use an automatic weapon (Assault rifle, Plasma Pistol/Rifle, SMG) to take down their shields then throw the grenade at the person's feet once your mag is empty or overheated. This should be more than enough to blow up your opponent and severely wound bystanders.

A fragmentation grenade from Halo 3.

A fragmentation grenade in mid-flight.

An explosion from a Frag grenade in Reach.

A Fragmentation grenade in Halo: Reach.

An overview of the M9 Frag Grenade from Halo: Reach.

A pair of M9 grenades from Halo: Combat Evolved.

A pair of M9 grenades from Halo 3.

Another view of the grenade in Halo: Reach.

A fragmentation grenade in Halo 2. 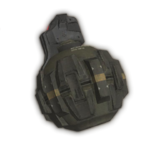 The Frag Grenade from Halo: Reach.

The frag grenade from Halo 4.

Remastered graphics M9 grenade from Halo 2: Anniversery
Add a photo to this gallery