This article is about the video game series. For other uses, see [[Marathon (disambiguation)]]. 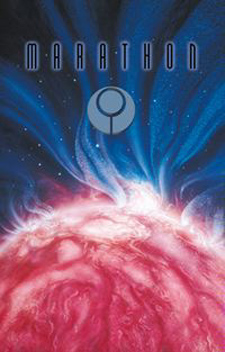 Marathon is a series of science fiction First-person shooter computer games from Bungie Software released for the Apple Macintosh. It was Bungie's most popular video game prior to the Halo series.

Games in the series

Marathon was released for the Apple Macintosh in 1994, and was one of the earliest First-person shooters to appear on the Macintosh. Since then it has been ported to iPad and is available free in the App Store, although in game purchases like Master Chief Mode and HD mode are available. Unlike some other similar games of that era (for example, id Software's Doom) Marathon and its sequels, Marathon 2: Durandal and Marathon Infinity were notable for their intricate plots.

Set in the year 2794 A.D., the game places the player as a security officer aboard the human starship UESC (Unified Earth Space Council) Marathon, orbiting the colony on the planet Tau Ceti IV. Throughout the game, the player attempts to defend the ship and its inhabitants from a race of alien slavers called the Pfhor. As he fights against the invaders, he witnesses the three shipboard AIs' interactions, and discovers that all is not as it seems aboard the Marathon.

Marathon 2: Durandal was the sequel to Marathon, and was released in 1995. In addition to being released for the Apple Macintosh, a Windows 95 version was also released. The game engine itself underwent several changes from its first incarnation. Although most of these changes were "under-the-hood," a few were visible to the user. The Marathon 2 engine offered performance gains on some machines, in addition to support for higher resolutions, higher color depths, and better quality sound. The enhanced engine also allowed the loading of maps from external files, allowing for users to (later) create and play their own maps.

Marathon 2 begins 17 years after the first game ends, as the player's ship arrives at the ruined S'pht homeworld Lh'owon. Durandal (one of the Marathon's AIs from the first game) sends the player and an army of ex-colonists to search the ruins of Lh'owon for information that would give Durandal an advantage against the Pfhor, who are planning a new assault on humanity. Among the new characters in this adventure are Durandal's evil counterpart Tycho, who played a minor role in the first game; a Lh'owon-native species known as F'lickta; an ancient and mysterious race of advanced aliens called the Jjaro; and the long-lost S'pht'Kr clan.

If Marathon: Durandal is played on Xbox Live Arcade, you can go on Bungie.net and acquire the Marathon Nameplate for Halo: Reach Multiplayer.

Marathon Infinity released in 1996, and included more levels than Marathon 2, which were larger and part of a more intricate plot. The game's code changed little since Marathon 2, and many levels can be played unmodified in both games. Marathon Infinity was only released for the Apple Macintosh. The most dramatic improvement in the game was the inclusion of Bungie’s own level-creating software, Forge, and their physics editor, Anvil. Forge and Anvil allowed a new generation of players to create their own levels using the same tools as the Bungie developers themselves. In Forge, distance was measured in World Units, which are roughly equivalent to 2 meters (6 or 7 feet). Another improvement was the ability to include separate monster, weapons, and physics definitions for each level, a feature heavily used by Double Aught, who designed the Marathon Infinity levels.

Marathon Infinity begins as the Pfhor destroy Lh'owon using a Jjaro-derived doomsday weapon known as the Trih'Xeem (early nova). Unfortunately, the weapon also releases a powerful chaotic being which threatens to destroy the entire galaxy. Because of the chaos, or by means of some Jjaro tech of his own, the Security Officer is transported back and forward in time and through his own dreams, finding himself jumping between timelines and fighting for various sides in a desperate attempt to prevent the chaotic being's release. After multiple instances of "jumps," the player (seemingly the only being who realizes he is being transported between possible realities) activates the ancient Jjaro Station, preventing the chaotic entity's release. The ending screen of Infinity leaves the story's resolution open-ended, taking place billions of years after the events of Marathon Infinity.

Halo: Combat Evolved shares many features with Marathon, though Bungie has confirmed that it is set in a different universe. Common features include the Marathon logo embedded in the Halo: Combat Evolved logo, Hunters, and SPNKr (also known as Lazyboy or Spanker) rocket launchers, not to mention other similarities to other weapons and also can be seen on Captain Keyes' shirt in with his medals when you first go to see him. Halo plays very much like a modern, high end version of Marathon (although it has far fewer puzzles). Bungie often recycles components, famous phrases, and jokes from its games, such as the Security armor, which intentionally resembles the armor worn by the Marathon series' protagonist. The player character is also a "MJOLNIR Mark IV cyborg" and shares the name of the Halo series' Mjolnir Powered Assault Armor.

This is a phrase used in, and synonymous with, the Marathon series. Explosive simulacrums occasionally shout the phrase as a failed attempt at trying to blend in with the regular BoBs. Since they are only piecing together random words, their nonsense gives them away.

Doug Zartman, who performed the BoB voices, was instructed during recording to improvise a random phrase, and this is what he came up with. It is very popular to say in the text chat of a network game of Marathon; meant more as a joke than anything, the sheer randomness of this phrase means that it can be used at any time.

The phrase has appeared hidden in other games, such as Myth, Tron 2.0, and Oni. A Morse code deciphered from the Halo 3 map High Ground also states this.