Master Chief Petty Officer of the Navy is selected by the Navy Chief of Staff. The MCPON is the senior enlisted member in the Navy, with a 3-star protocol equivalency. The MCPON represents the entire Navy enlisted force, and speaks on behalf of the enlisted members of the service to Navy and UNSCDF senior leadership.

Hillside Memorial. Pictures, ribbons, flowers, insignias, and weapons to remember the dead. The insignia for MCPON can be seen attached at the top-right. 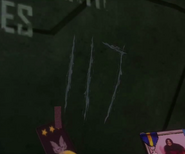 Hillside Memorial: "In memoriam." In memory of John-117. The insignia for MCPON can be seen attached to the memorial, at the bottom.
Add a photo to this gallery

Retrieved from "https://halo.fandom.com/wiki/Master_Chief_Petty_Officer_of_the_Navy?oldid=1792177"
Community content is available under CC-BY-SA unless otherwise noted.