After the launch of Halo 3, they were given the contract to produce figures from the characters of the game, mainly the popular units, such as John-117, and several multiplayer figures to incorporate the increasing demand by their customers.

On January 29, 2010, McFarlane Toys announced that they would produce figures from Halo: Reach, which were released beginning in September 2010.[2]

McFarlane Toys created a statue of Noble Team for the Legendary Edition of Halo: Reach.

McFarlane Toys is notable for the amount of detail their figures have to in-game characters. However, it has been noted that the figures are very fragile, being prone to breaking within a few days of purchase. There have been multiple inaccuracies in marketing the figures (i.e., photos of figures have wrong accessories; incorrect naming; etc.).

In addition to purchasing the figures, customers would also receive 10-35 Halo points per figure (except for the Halo 3 12-inch Action Figures, which give the customer 40 Halo points) with in which can be redeemed for the Halo Points Program which started in January 2009. The Halo Points Program officially began in February, and all official redemption certificates must have been posted by November 30, 2009. The program was reserved to U.S., Canada, Australia, and most European countries and has since been discontinued.[3] 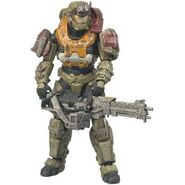 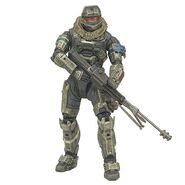 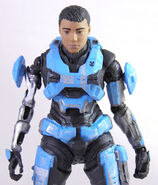