The first Halo Anniversary series of toys was a line of action figures created in 2011 to celebrate the 10th anniversary of Halo: Combat Evolved and the Halo franchise in general. It includes figures of characters from each installment in the franchise up to that point, namely Halo: CE, Halo 2, Halo 3, Halo Wars, Halo 3: ODST and Halo: Reach.

This figure, created specifically for this series, portrays John-117 in Mark V Mjolnir Armor, as he appeared in Halo: CE. It comes with an MA5B Assault Rifle, a M9 Frag Grenade and the left half of the icon for the Easy difficulty, which can be combined with other parts from separate figures to create the icons of all four difficulties.

This figure is of Taylor Miles, better known as Dutch, who is the heavy weapons specialist of Alpha-Nine during the events of Halo 3: ODST. It is to-scale with the previously-released figures of his squad-mates, and comes with the M6 Spartan Laser, a M9 Frag Grenade and the other half of the Easy difficulty's icon.

Originally released back in 2008 in our very first series of Halo action figures, Cortana returns for the 10th Anniversary of the Halo franchise. This figure features clear blue plastic and a light-up base to represent her holographic appearance. Cortana also comes with a knife for the Difficulty Plaque that can be added to upgrade it to "Normal" difficulty.

Cortana on her base with the a knife for the difficulty plaque.

The final packaging photo of Cortana.
Add a photo to this gallery

Another classic character from our earliest Halo lines returns for the 10th Anniversary: the Arbiter, originally from Halo 3 Series 2. Thel 'Vadam comes with the ceremonial armor of the Arbiter rank, a Covenant Energy Sword, and a Plasma grenade. Figure also comes with the second knife for the Difficulty Plaque, upgrading it to "Heroic" level.

The Arbiter wielding an Energy Sword and the other knife to the plague to his left.

The final packaging photo of the Arbiter.
Add a photo to this gallery

The ever-popular Grunts come in many colors and ranks, and the Halo Anniversary series introduces a new figure in clad, dark, and stealthy gray armor, and comes with a Fuel Rod Gun and a Plasma Grenade. If you're collecting all the pieces of the Difficulty Plaque, this small figure comes with a big bonus: the Elite skull that finishes the emblem and upgrades it to “Legendary” status.

The black Grunt carrying a Fuel Rod Gun and the Elite head of the plaque to his left.

The final packaging photo of the black Grunt.
Add a photo to this gallery

The "Fearless Leaders" 3-pack celebrates a trio of other bold heroes from the blockbuster Halo games. Representing Halo 3: ODST is the leader of its Helljumper squad, Gunnery Sergeant Edward Buck, featuring his signature MA5C Assault Rifle and removable ODST helmet. Halo Wars, introduced several new leaders to the Halo universe, including the UNSC Marine, Sergeant John Forge, featuring his forest camouflage armor and a Shotgun. Halo: Reach, introduced players to the SPARTAN-IIIs of Noble Team, and their leader, Carter, featuring his Designated Marksman Rifle and a Frag Grenade.

Carter with his DMR. 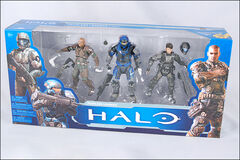 The final packaging photo of the Fearless Leaders boxed set.
Add a photo to this gallery

The star of the Halo trilogy has evolved quite a bit over the past decade, and John-117 Evolution 3-Pack covers his three best-known versions. Representing the first Halo game is the Halo: Combat Evolved John-117. Figure includes Mark V armor, an Assault Rifle, a Frag Grenade, and a unique "low polygon count" design. Straight from the cover of the second game is our Halo 2 John-117, with Mark VI armor, dual-wielded SMGs, and a Frag Grenade. Finishing the fight is the Halo 3 John-117. This figure includes battle-damaged Mark VI armor, a Sniper Rifle and a Frag Grenade. 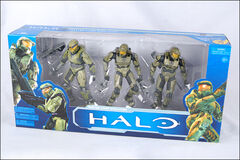 The final packaging photo of John-117 Evolution pack.
Add a photo to this gallery

Retrieved from "https://halo.fandom.com/wiki/McFarlane_Toys/Halo_Anniversary_Series_1?oldid=1753669"
Community content is available under CC-BY-SA unless otherwise noted.