Not only did McFarlane Toys celebrate the 10 year anniversary of the Halo games, they just can't stop. Now in their second series of Halo Anniversary action figures, you can get figures you have definitely never seen before at stores near you.

This all-new version of John-117 shows the hero as he appeared in the 2010 animated movie, Halo Legends, and is our first figure inspired by the Halo "expanded universe" of animation, novels, and comic books. Figure comes with an Assault rifle, a Frag Grenade, and the globe piece of the UNSC Logo.

The Package Master wielding an Assault rifle and a piece of the UNSC logo to his left.

The final packaging photo of The Package version of Master Chief.
Add a photo to this gallery

Our first UNSC officer figure is the first person players ever see in the original Halo video game: the commanding officer of the Pillar of Autumn, Captain Jacob Keyes. This all-NEW figure features Keyes as he appears in this fall's Halo: Combat Evolved Anniversary, in sharp gray military uniform. Figure comes with the fan-favorite Magnum pistol and the banner piece of the UNSC Logo.

Captain Jacob Keyes with a Magnum and the banner of the UNSC logo.

The final packaging photo of Jacob Keyes.
Add a photo to this gallery

Back in Halo 2, Master Chief's MJOLNIR Mark VI armor was the basis for all multiplayer Spartans. Our first Halo 2 multiplayer Spartan action figure takes collectors back to those days—when all you could do to customize yourself was change your primary and secondary armor color. Our multiplayer Spartan Mark VI features bright white armor with cool blue accents and comes equipped with the ever-popular Battle Rifle, a Frag Grenade, and the left wing piece of the UNSC Logo.

The white/blue Spartan Mark VI with a Battle Rifle and the left wing of the UNSC logo.

The final packaging photo of the Spartan Mark VI.
Add a photo to this gallery

The legacy of the most technologically-advanced species in the Halo games, the Forerunners, can be seen everywhere you turn. For the first time, Halo: Anniversary Series 2 brings a pair of these ancient machines to your collection: 343 Guilty Spark and a Sentinel. The Sentinel is 'action figure' sized and features articulated appendages, while the Guilty Spark features a reversible eye that can be changed from blue to red. Figures include a base and poles so they can hover near your figures, along with the right wing piece of the UNSC Logo.

The Sentinel, Guilty Spark, and the right wing of the UNSC logo.

The final packaging photo of the Sentinel-Guilty Spark pack.
Add a photo to this gallery

The demolitions expert and pilot of Buck's ODST squad joins our action figure lineup: Private First Class Michael Crespo, better known as "Mickey." This NEW figure, clad in black ODST armor with red accents, is in scale with our previous Halo 3: ODST figures, so Mickey won't look out of place with his teammates. Figure comes with Mickey's signature weapon, the Rocket Launcher. Mickey also comes with the eagle body piece of the UNSC Logo.

Mickey carrying a Rocket Launcher with the eagle piece to the UNSC logo to his left.

The final packaging photo of Mickey.
Add a photo to this gallery

This special Halo Wars boxed set features three heroic SPARTAN-IIs: Jerome, Douglas, and Alice, collectively known as Red Team. This trio of super-soldiers fought alongside the crew of the Spirit of Fire, defending them from the dangers encountered on Shield 0459. Our Red Team 3-pack brings back the leader, Jerome-092, and completes the team with two never-before-released figures of Douglas-042 and Alice-130. Each includes some serious firepower to help them carry out their mission: Jerome comes with a Spartan Laser, Alice comes with dual SMGs, and Douglas comes with a Shotgun. One Spartan is a force to be reckoned with, but a coordinated team of them is virtually unstoppable. Go back to 2531, before the fall of Reach, and get the complete Red Team, all in one box! 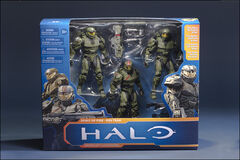 The final packaging photo of the Spirit of Fire Red Team pack.
Add a photo to this gallery

Retrieved from "https://halo.fandom.com/wiki/McFarlane_Toys/Halo_Anniversary_Series_2?oldid=1726236"
Community content is available under CC-BY-SA unless otherwise noted.