McFarlane Toys Halo 3 Series 1 action figures were released in March 2008. The line was available through notable retailers such as Wal-Mart, Toys ‘R’ Us, Gamestop, FYE, and Spencer Gifts.[1]

The John-117 action figure features game-accurate MJOLNIR Mark VI Battle Armor and the MA5C ICWS Assault Rifle. It is five inches tall, and has 18 points of articulation. John-117 sculpt differs from that of the other Spartans in this series due to the fact that it features no removable armor. The MA5C can also be attached to the figure's back via a peg which was included with the figure. The right hand on this figure is designed specifically to hold the Assault Rifle and differs from later releases.

While the packaging specs indicate that this figure was supposed to come with a fragmentation grenade, this is an error as the inner-bubble contains no slot for the grenade to have been included.

This figure is worth 10 Halo Points.

The Brute Chieftain action figure features the chieftain's updated Halo 3 armor and comes with a Gravity Hammer. It stands seven inches tall, and has 15 points of articulation. It is the largest figure in the series. The bottom portion of the hammer is removable, which permits the chieftain to wield it.

The hammer lacks the hand guard present towards the bottom of the handle. The helmet on this figure is not removable and the face sculpt lacks a beard.

This figure is worth 20 Halo Points.

The Jackal Sniper action figure features the updated Halo 3 character design and comes with a Beam Rifle that may be stored on the figure’s back via the included peg. This figure stands 4¾ inches tall and has 16 points of articulation.

It is one of the few McFarlane Halo figures in this scale that includes peg holes in each of the feet which can be used with a standard sized disk base to aid the figure in standing. However, no base was included with the figure. The figure also has yellow eyes, despite the fact that Kig-Yar had light violet eyes in Halo 3.

It is worth 20 Halo Points.

The Cortana action figure stands roughly four inches tall without base but nearly five inch tall with base. This figure is made of translucent plastic and features no points of articulation. The base is designed to mimic a holographic projection pad. Three blue LED's built into the front of the base help to provide Cortana with a glowing appearance when lit. Batteries were not included.

Currently, this is the only McFarlane Halo figure to feature any working electronics.

The Grunt action figure came in two versions, the orange Minor and the green Heavy Grunt. Each stands at around 3¾ inches tall, has 14 points of articulation, and features a removable methane tank and mask and come with a Needler and Plasma Pistol as well as a peg for each weapon.

The inner bubble for each Grunt was unique and had the figure at a different angle with a different weapon placement. The pegs included with this figure were not intended for use with the Grunt itself, but with other figures such as John-117 or other Spartans which could support storing the weapon on the leg.

The Grunt is a confirmed short pack at one per case with the color chosen at random. Steve Hamady of McFarlane Toys verified that they were produced in equal numbers and that the original solicitation used by retailers to generate pre-orders for a Grunt Two-Pack was incorrect.[verification needed] This was due to the weight of an individual Grunt being on par with a regular figure while two Grunts would have required special packaging and been too heavy to be cost effective. Thus they were released individually.

Grunt Minor in package.
Add a photo to this gallery

The Spartan Mark VI figures come in three colors, each standing five inches tall and featuring 18 points of articulation. They come with a MA5C ICWS Assault Rifle and a fragmentation grenade, plus two pegs.

Each Spartan featured removable shoulder armor, chest armor and helmets that enables the Multiplayer Spartans to be customized. Additionally, they featured game accurate detail stripes on the right thigh and bicep with a "VI" stamped in the middle. All Series 1 Mark VI figures had yellow stripes.

Each Mark VI Spartan is worth 10 Halo Points.

Blue Mark VI in package.
Add a photo to this gallery

The Blue and Steel CQB Spartan-II action figures features the same interchangeable armor system and peg system for accessories as the other Multiplayer Spartans. They come with a Assault Rifle and a Fragmentation Grenade and have 18 points of articulation.

The CQB armor is the only Spartan Armor in Series 1 to not have a mass release version, and to date the only versions to feature white detail stripes.

Each CQB Spartan is worth 10 Halo Points.

Steel CQB in package.
Add a photo to this gallery

The Red EVA Spartan-II action figure features the same interchangeable armor system and peg system for accessories as the other Multiplayer Spartans. It comes with a Assault Rifle and a Fragmentation Grenade and has 18 points of articulation.

The Red EVA is a mass release figure that was available at all retailers. There were no other versions of the EVA armor in this series.

This figure's helmet has been noted as being too small, however this was not discovered until after release. Future EVA figures featured the revised helmet, which is significantly larger.

The Red EVA is worth 10 Halo Points.

The Red EVA Spartan in package.
Add a photo to this gallery

The Warthog figurine is based on the UNSC M12 Light Reconnaissance Vehicle. The Warthog measures 4 inches front to back, and 2 inches side to side. It features rolling wheels, a rotating turret, and a swiveling balljoint. It stands on a 4-inch by 2-inch base. 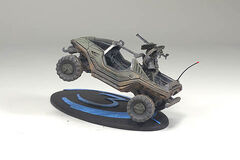 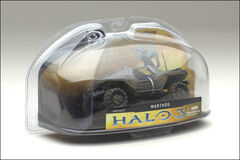 The Brute Chopper replica is based on the Covenant Type-25 Rapid Assault Vehicle. The Chopper measures 4 inches from front to back, and 2 inches side to side. It features a swiveling balljoint and stands on a 4-inch by 2-inch base. 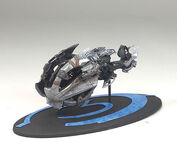 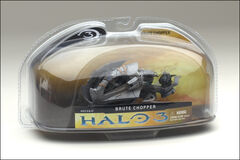 The Ghost replica is from the Covenant Type-32 Rapid Assault Vehicle. The Ghost measures 4 ¼ inches from front to back, and 3 5/8 inches side to side. It features a swiveling balljoint and stands on a 4-inch by 2-inch base. 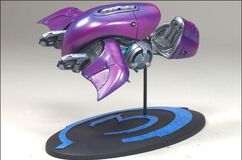 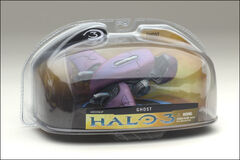 Retrieved from "https://halo.fandom.com/wiki/McFarlane_Toys/Series_1?oldid=1805924"
Community content is available under CC-BY-SA unless otherwise noted.