McFarlane's Halo 3 Series 2 has sixteen different figures. Series 2 has a new type of packaging: the blister card, which is much easier to open.

This figure is the second Master Chief figure. John-117 Series 2 action figure is one of Todd McFarlane's creations for Halo 3.

It features the John-117, with olive-green armor; wielding a Spartan Laser (even though the prototype was pictured with a Shotgun), it only comes with the Spartan Laser and a Fragmentation Grenade (which the Series 1 version was lacking). Its armor (chest plate, shoulders, and helmet) is not detachable, despite being said on the package. It was released on June 10, 2008.

It is five inches tall, and, like other Spartan figures, John-117 has 18 points of articulation, weapon storage on the waist, back, and right leg.

This figure is worth 10 Halo Points.

The Arbiter action figure is a replica of the character from Halo 3.

This figure has 18 points of articulation, an Energy Sword, and weapon storage on the Arbiter's right leg. The Energy Sword is very hard to get the figure to hold, as the figure's hand is closed into a tight fist.

This figure is worth 20 Halo Points.

The Brute Stalker action figure is one of Todd McFarlane's creations for Halo 3. It features the new Brute Stalker equipped with two Spikers. They are difficult to remove, but not impossible, should a different weapons be wanted for your figure to hold. However, the Spike Rifles feature the weapon pegs on them which slot into indents into the Stalker's hands making them ideal for displaying well. It is 6 inches tall, with 15 points of articulation. Also, the Brute Stalker has a removable helmet.

The ODST action figure is a replica of the Orbital Drop Shock Troopers from Halo 3.

The ODST figure is armed only with a BR55 Heavy Barrel Service Rifle. Unlike the ODSTs in Halo 3, this figure doesn't have a white or a red strip on his shoulder. It stands 4 3/4 inches at the top of the head.

This figure has 16 points of articulation, a BR55HB SR Battle Rifle (that is on a smaller scale than other Battle Rifle that come with other figures, with the exception of the Spartan Scout), and weapon storage on the back.

The ODST soldier in his packaging. 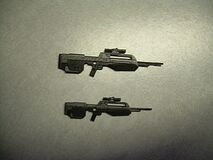 The ODST's Battle Rifle (bottom) compared with a Battle Rifle from another figure (top).
Add a photo to this gallery

The Drone action figure is one of Todd McFarlane's creations for Halo 3. It features the new Drone from Halo 3, armed with a Plasma Pistol.

It is set to be around six inches tall, and has 12 points of articulation, as well as folding wings. It comes with a base plate for the figure to stand on because the drones' insectoid structure makes it hard to stand without one. The stand is almost the same as the ones that come with the Series 1 Vehicles (a large oval with the Halo 3 symbol on it).

The Plasma Pistol it comes with does not feature a peg or a peg-hole so it can not be placed on a Spartan's or Elite's belt. It has been noted that the Drone holds the Plasma Pistol in its right hand (the image shows the drone holding its weapon in its left hand, but the actual figure is right-handed), but in the game, all Drones are left-handed.

The Drone in its packaging. 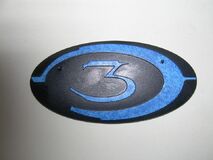 The base that comes with the Drone.
Add a photo to this gallery

The CQB Spartan comes in a red color, with yellow detail coloring. It stands 5 inches tall and is articulated at neck, shoulders, elbows, wrists, waist, hips, knees, ankles and feet. It is armed with a shotgun and a fragmentation grenade. Like all other Spartan figures, their helmets, chest plate, and shoulder plates can be interchanged with other Spartans. Each figure has 26 moving parts, 18 points of articulation, removable helmet, shoulder plates, and chest plates. The thumb on the right hand is extremely easy to break off as opposed to most other figures that have closed fists.

The Red CQB in its packaging.

The Red CQB action figure.
Add a photo to this gallery

The EOD armor is a new armor introduced in Series 2 for McFarlane's Spartan figures. These figures come in two colors: olive and blue. A tan EOD Spartan is shown on the back of Series 2 Matchamking figures' package, but there is no such figure. The olive Spartan EOD is available at any Halo 3 figure retailer. The blue Spartan is only available at Wal-Mart. The blue figure has yellow detail coloring, while the olive figure has red detail coloring.

Both Spartans have a Shotgun and a Fragmentation Grenade. They are both worth 10 Halo Points.

The olive EOD Spartan in his package.

The blue EOD Spartan in his package.
Add a photo to this gallery

Both come with a Beam Rifle and a Frag Grenade, even though the brown EVA is shown with an Assault Rifle. Both are worth 10 Halo Points.

The white EVA Spartan. This figure is only available at specialty stores.

The white EVA Spartan in his package.

The brown EVA Spartan. This figure is a Toys R Us exclusive.

The brown EVA Spartan in his package.
Add a photo to this gallery

The ODST helmet is another new armor for McFarlane's Spartans. Since the ODST armor is only a helmet, the rest of the armor is Mark VI. These figures come in two colors: cyan and steel.

The cyan Spartan is a Wal-Mart exclusive, while the steel Spartan is a GameStop exclusive. Like all other ODST figures, it has orange detail coloring.

Both figures have a Battle Rifle and a Fragmentation Grenade. Both are worth 10 Halo Points.

The cyan ODST Spartan. This figure is a Wal-Mart exclusive.

The cyan ODST Spartan in his package.

The steel ODST Spartan. This figure is a GameStop exclusive.

The steel ODST Spartan in his package.
Add a photo to this gallery

Series 2 has two more variants of the Mark VI Spartans; a gold version and a pink version.

The gold Spartan is a Transworld/FYE exclusive, and the pink one is a D&R Lineups exclusive. Both figures have a Shotgun, and a Frag Grenade (although the Pink Spartan concept wielded a Gravity Hammer).

Like all Matchmaking figures, they are worth 10 Halo Points.

The gold Mark VI Spartan. This figure is a Transworld (aka FYE) exclusive.

The gold Mark VI Spartan in his package.

The pink Mark VI Spartan. This figure is a D&R exclusive.

The pink Mark VI Spartan in his package.
Add a photo to this gallery

The Scout armor is a new armor for McFarlane's Spartans. This figure comes in one color: tan (although a blue Scout is shown on the back of the Spartans' packages, that figure is in Series 3). This figure has a Battle rifle and a Fragmentation Grenade. It has red detail coloring.

An interesting note is that the Spartan's Battle Rifle is on a smaller scale than the Battle Rifles that come with other figures. It is the same size as the ODST figure's Battle Rifle.

The Spartan Scout in his package.

The Scout's Battle Rifle (bottom) is smaller than the other Battle Rifles (top) that come with other figures.
Add a photo to this gallery

Retrieved from "https://halo.fandom.com/wiki/McFarlane_Toys/Series_2?oldid=1722152"
Community content is available under CC-BY-SA unless otherwise noted.