Meltdown, also known as War Games Map_Set/: 232-8,[1] is a multiplayer map for Halo 4. The map is set on an unknown icy moon on which a Forerunner reactor is experiencing a catastrophic meltdown, melting icy areas and leaving rough terrain exposed.[2]

The shape of this large-scale map is based on a figure-8 loop carved into an icy canyon, with pathways and tunnels running through the rock to allow for infantry combat on the upper paths as well as vehicular Big Team Battle gameplay on the lower paths. The map will also feature numerous man cannons that send players and vehicles to various locations within the map. 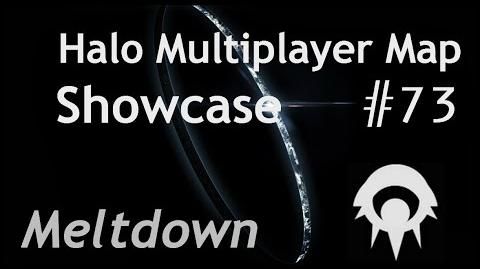 The upper paths will allow fire on each other.

An icy tunnel allows easy passage through the map.

A Ghost prepares to ram a Spartan-IV.

A Spartan engages another Spartan in battle.

A Spartan creeps up behind a player.

Blue side of the map.

Red side of the map.
Add a photo to this gallery

Retrieved from "https://halo.fandom.com/wiki/Meltdown?oldid=1792235"
Community content is available under CC-BY-SA unless otherwise noted.