You get promoted in the COH by working on the improvement article am I right? If there is another way let me know please. Fork 22:10, 23 April 2007 (UTC)

Is ghost a machinima production using the halo 2 multiplayer? I'm really curious and it sounds awesome. That means the actors "act" by playing the game right. Fork 22:14, 23 April 2007 (UTC)

What does it take to be in Ghost? I don't have XBL, but your Halofanon said, "Special Episode II is still under construction! However, RR is taking requests to be portrayed in thie episode. All requests will be granted...". I was wondering if I could be in Ghost II. I don't really care if I die or not. Just contact me to see if I misread the note-- which I think I did-- or whatever. :P -Blemo 22:52, 25 April 2007 (UTC)

Heya,just want to know if there is a RP tonight.

Hey, I just wanted to bring this page to your attention: http://halo.wikia.com/wiki/Hard_Points . The grammar there is horrendous. Even I had to read it a few times to get it, and I'm not too sure whether to re-write what's there or completely redo the page. I'm pretty sure the hard points are spots where two ships can attach to one another and link up, but the current page just doesn't make a whole lot of sense. I can find references from First Strike if need be, but I'll wait and see what you have to say about it. Hope I'm not bothering you too much with this. Pyromancer 00:55, 24 April 2007 (UTC)

There was a person who said inapropriate things. I erased the grunt page becuase it becuase of the things he said using pornographic terms in his edit so i erased it. I am sry for what i have done.

Ya I love it! I call myself "Stinky!" but for some odd reason I can't join other games it always says "CONNECTION LOST" every time I join a game but people can still join my games. The evil O,malley 03:06, 24 April 2007 (UTC)

Thanks for the award and the soon-to-be-appreciated help on custom awards. If it's not too much of a trouble, you're my newest friend. =D. Sorry if that sounded a little gay or cheesy. Thanks! =D -Blemo 03:27, 24 April 2007 (UTC)

How do I join the UNSC of Halopedia?

Thank you for the Welcome. I appreciate it. But how do I modify my page like yours or something like that? Freelancer

A certain user says that all of the S-III's are from Harvest. Do you know if this is true. I didn't think it was but this user says it's in the book somewhere and I can't find it. If all of the S-IIIs were from harvest, the some of the kids might have known eachother and come from the same orphanage, right? I saw no indication of that in nylund's book. Peace. Contact me ·

I can answer that. They're from all different worlds, but Alpha Company was only from Harvest, Biko, and Jericho VII. Source: Halo: Ghosts of Onyx, Section II, page 70. May the Cause support you, Mouse

have you ever played FEAR? I might want to buy it, so I need advice, is it good?, must've to you, cause you made that story (where Caboose kills me:{) with Paranormal stuff, not to mention it was named Ghost

Will you be getting on R6V tonight?

Just re-wrote the page on Hard Points, although the page name needs to be made into 1 word (as written in First Strike), but I currently do not retain the knowledge to complete such a task. Take a look, see what you think. Pyromancer 00:14, 25 April 2007 (UTC) 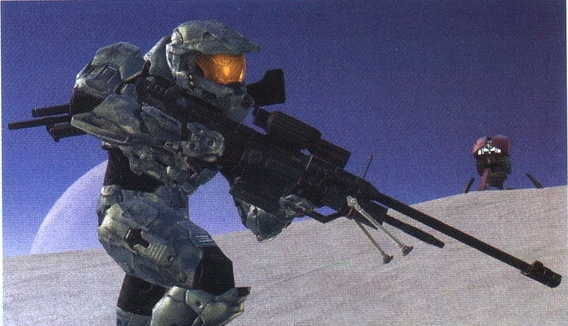 Background Color= Any light tint of blue, (if there is a background color)

Font Color= White, (or blue if there is no background color.)

Border Color= Black, (if there is a border).

Text= This Halopedian has been awarded the Blemo Medal of Honor, an award given solely by Blemo. This user has been a best friend, or has helped him in his time of need.

Oh and Specops306 has a question that I cannot answer, so I thought you could. "Could someone explain what priveleges or expectations people get with their ranks? RR explained to me that low ranks dont really get many priveleges, but are they given anything? what great power comes from this great responsibility? Kora 'Morhekee"

Okay. So Iv'e read the fanon on my part an here is my response:

1) come back as a flood form (preferrably combat or juggernaut forms.) 2) dodge the shot and kill the marine

Thanks for the help!

Australian universities do things differently from in the U.S. I'm in first year so it's a introductory course that briefly covers all the major areas of biology. We cover all those topics, and can specialise in second and third year. -- Manticore

Hey, I just had another thought... I am sexy... I just had another another thought... you know the editcount thingy? You know a bit about Javascript, I think, so do you think you could modify it and put it at User:RelentlessRecusant/editcount.js so all you see is the total number of edits once you've put in a username? That way, in a userbox, you SHOULD be able to link to 78 here, except with a different URL for wherever you put it and then when you put that on your userpage, it displays your actual number of edits without any need to update! SEXY! LIKE ME!!! Of course, if you can't do it, there's always Javascript for Dummmies, so I could do it, I guess... Just thought I'd ask you first, though, just in case. 24.251.106.233 04:03, 25 April 2007 (UTC)

um im having a hard time making my userbox so i guess i must be doing something wrong so anyways were do you find all these pics and fonts sizes anyway seamonkey 04:04, 25 April 2007 (UTC)

Dude? Can i have a promotion? I want to become a Major Domo, so I wrote a new article on Superheated plasma, the type of ammunition used by Covenant forces. I'm not sure if this is enough, but I will be on the lookout for more edits. :) -Blemo 04:46, 25 April 2007 (UTC)

Housten we have a vandalizing noob... Edit

We got someone vandalizing the forum delete at once! Forum:Read this all halopedia fans its important halo information

I'm wondering something, and you're one of the few people I can just ask and would have an answer. How hard is it to start up a new wiki? Get back to me on this. CaptainAdamGraves 20:48, 25 April 2007 (UTC)

Retrieved from "https://halo.fandom.com/wiki/Message_Wall:RelentlessRecusant/Archive_78"
Community content is available under CC-BY-SA unless otherwise noted.