Looking for the city of New Mombasa, or the Halo 2 Vista achievement?

The Battle of Mombasa

Metropolis is the fifth campaign level of Halo 2. It is the first level where you are able to drive the Scorpion Tank and the first level with Wraiths and Banshees. Metropolis is one of two levels where you can acquire the Gauss Warthog (the other being Quarantine Zone). It takes place in New Mombasa, and starts as soon as the player emerges from the highway tunnel that was the last part of Outskirts.

John-117 and two Marines must battle across a long bridge guarded by Covenant forces and another but shorter tunnel than the one at the end of Outskirts. After that, there is a small park, where another Marine-controlled Warthog lurks, and an open urban area with Wraiths, before going onto catwalks attached to buildings in order to attempt to board the Scarab and take out the Covenant piloting it.

A Marine sitting on the ground, breathing erratically, watches as John-117 approaches. John steps over him to a standing female Marine.

A Pelican drops a tank. Sergeant Major Avery J. Johnson gets out, John-117 and Marines walk over.

(Note: The following dialogue varies according to difficulty)

Sergeant Johnson climbs back on the Pelican, and cocks its machine gun.

John starts out next to the tank, holding a Battle rifle, and an SMG as a sidearm. There is also a Warthog to John's right. The burning skyline with the Covenant CAS-class assault carrier hovering over it is visible in the distance. The bridge is strewn with the wreckage of cars, trucks and buses. A multitude of Ghosts patrol the bridge, as well as a Covenant Wraith tank.

About halfway across, Banshees swoop in for an attack from either side, and three Phantoms fly by, deploying troops and another Wraith tank. A lone Marine (or two, if one of the two accompanying you was killed) stationed on the bridge joins you and the other two Marines (if you took the Scorpion). At the other end of the bridge, a group of Banshees flies in over the rooftops.

As you approach the second speed tunnel

A pack of Ghosts skitter into view and open fire on you. They are soon joined by a pair of Wraith tanks which come in from the nearby highway tunnel, as well as another pair of Banshees.

You enter the highway tunnel meeting little resistance until a barrier supposedly prevents you from taking your vehicle any further. A Warthog pulls up and joins your cause, while a trio of Jackals stationed on the barrier fires down at you.

A different female Marine walks up to you and offers you a Shotgun.

You enter a dark wreckage and Covenant strewn section of the highway tunnel. A pair of Elites and a large group of Grunts attack, while a pair of Jackal Snipers fire on you from a distance with their Beam Rifles. At the end of the tunnel, more Grunts and Elites attack, as well as another trio of Jackals. You enter a series of sewage tunnels that open out into a massive courtyard.

As you enter Part Three, a Jackal Sniper is seen trying to snipe the Marines. Assassinate him to easily get a Beam Rifle.

This Town Ain't Big Enough For Both Of Us

The Scarab can be seen in the distance, although it leaves quickly. A Gauss Warthog pulls up to you.

You come upon a Marine outpost that is under siege by a trio of Wraith tanks and Jackal Snipers, while a fellow group of Marines on a Warthog valiantly defends. A Phantom delivers a pair of Ghosts, but they are neutralized easily by the combined support fire from the two Warthogs.

A Pelican delivers a squad of Marines.

Another Pelican delivers a Scorpion Tank as you walk into the base. You are greeted by a Marine at the entrance.

Corporal Perez leads you up the heavily guarded stairs to a balcony overlooking the streets where you fought the Wraith tanks. A huge plasma beam can be seen firing at something in the distance, and the Scarab lumbers into view.

The Scorpion fires its main cannon twice at the Scarab, to no effect. The Scarab aims its beam and destroys the tank in a single blast, then starts walking toward the base, demolishing the pedestrian walkways in the process.

They fire at the Scarab, but it keeps advancing.

The Scarab walks right over John's position, knocking over an antenna.

John enters a large building in pursuit of the Scarab. You end up on a series of walkways above a large water-filled canal, and the Scarab is walking below you, while Covenant troops fire at you from the deck.

Eventually, the Scarab reaches the end of the canal, and can go no further.

If John doesn't board the Scarab

If John still doesn't board the Scarab

Groups of Pelicans fly by in front of the Scarab. Occasionally, one will turn and unleash a barrage of missiles onto the Scarab, doing little damage to its armor.

John enters the Scarab, to find a couple of Ultra Grunts and an Ultra Elite, with two Major Elites piloting the Scarab.

After you clear the hostiles out, the Scarab falls apart and John-117 walks out. Note he holds his primary weapon, even if it's a Magnum acquired from the previous level, unless it's out of ammo.

Cut to bridge of the In Amber Clad.

The Assault Carrier begins to accelerate. A purple glow appears in front of the ship.

Cut to underside of the In Amber Clad. Johnson's Pelican docks via a hatch under the ship.

Cut back to bridge of In Amber Clad

The Assault Carrier enters Slipspace, pulling In Amber Clad with it. The jump creates a massive electromagnetic pulse that engulfs the whole of New Mombasa.

After the bridge, where you get the Shotgun from a fellow Marine, the tunnel was originally supposed to be flooded. But since the water effects didn't work and they ran out of time, the water was removed.[1]

Traveling over the bridge with a Ghost.

The Scarab Destroying the Scorpion tank.

Concept art of the In Amber Clad chasing the Solemn Penance.

Another concept art of In Amber Clad chasing the Solemn Penance with an alternate lighting. 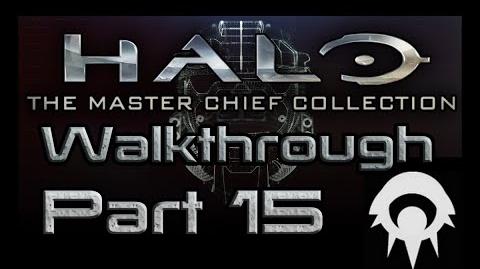