Midnight is the eighth and final campaign level of Halo 4. It was first announced along with the rest of the achievements for Halo 4.[1] This is the only mission in Halo 4 where the F-41 Broadsword is used and where the Gravity Hammer appears, allowing players to get the Chief, Smash! achievement.

In The Master Chief Collection the par time is 25 Minutes and the par score is 25,000.

Screen fades and pans right to reveal a Broadsword. Camera changes angle. A hatch opens up and a bomb floats up to the Broadsword, camera zooms in to reveal the bomb is a HAVOK Nuke. The Broadsword is released, and with Chief as the pilot, flies out of the hanger. Screen fades to black.

Screen fades to the Ur-Didact's ship with Chief speeding up behind him. Camera changes into the cockpit of the Broadsword.

The Didact opens a slipspace portal.

Chief boosts to the Didact's ship and gets below the shield just in time before the ship enters slipspace.

Chief continues to avoid and dodge obstacles and take out turrets for some time.

The Broadsword maneuvers through a tight tunnel filled with spires. Walls inside shift to block its path. Outside, the Broadsword must unlock further gates and clear anti-air defenses.

From the Cradle[edit | edit source]

The new area is round and surrounded by particle cannons. A tunnel at the center leads down to the interior of the ship, but begins to close off.

The Broadsword destroys a beacon at the center of the arena, which shuts off the cannons forming hazards on the floor. It then destroys the energy source inside one of the cannons.

The Broadsword shuts down the second cannon.

The Broadsword takes out the third cannon.

The Broadsword destroys the final cannon.

John and Cortana's Broadsword zooms out of the firing area.

Cut to the Infinity, positioning itself to face the Didact's ship.

Infinity fires twin fore weapons, which strike the front of the Mantle's Approach and create a hole leading to the interior. Chief's Broadsword flies back to enter the ship.

The fighter curves around and dives inside the still-burning hole. Inside it's dark and a tight fit. A wall tries to close to block John's way.

The Broadsword spins out of the wall's way. More walls start closing in to stop their fighter. Cut to the Broadsword's cockpit. John can see the tunnel growing tighter and tighter.

Cut to black as the fighter crashes. Fade in and pan back to it, as John jumps out. Cortana: "Now what do we do?" John turns around and carefully removes the warhead from the missile. He then locks it onto the back of his armor and grabs his assault rifle.

As John walks away, cut to black.

…To the Grave[edit | edit source]

John heads down a tunnel; moments later his HUD tints purple and begins to flicker with static. Cortana's image appears on a side screen. Multiple waypoints are listed on John's HUD

John's HUD turns back to normal. He then engages several enemies. Promethean Knights are encountered in the next room.

More Knights are fought in a room with two doors.

John jumps down a shaft, his descent slowed by a gravity lift.

John lands and Cortana's face returns to his HUD. Cortana: "Still good for something, I guess. I detected an energy signature up ahead. I think it's a transit system like on Requiem. Find a way to access it." John goes down the hallway to find a room with a large chasm. The platform at the end has an activation port. John's visor flickers purple again.

John plugs her into the system. Cortana briefly appears then fades to a glowing sphere, flickering white and red.

John passes through the opened portal to another room. This hallway is filled with Crawlers.

John passes through the portal at the end to another room with several portals.

John travels higher up into the room until he reaches it. The next room is an armory. A whispering Cortana can be heard in the background.

After stocking up, John passes through the portal and arrives at the previous room.

John reaches the portal, but the next room is not at the Composer.

An infinite wave of Crawlers charges the player from the bridges.

Two Focus Turrets slowly charge and fire at the Crawlers. Cortana finishes and her image appears for the player to reclaim her.

If John stalls further, Cortana will repeat these lines at random:

John retrieves Cortana and runs down a bridge to the portal at the end. Turrets lining the bridge assist him.

John teleports and walks into a gravity lift, which takes up several stories. His HUD flickers purple again.

At the end of the platform is a man cannon. John runs into it, and he shoots forward through a tunnel to float into a large room. In its center is the machine channeling the Composer. John's HUD flickers during the trip.

The room's roof opens up, revealing Earth in the sky above. An enormous slipspace portal forms in the chasm below the machine.

John lands on a platform with a hallway leading further in. After he passes through the door, he sees an orange energy shield now surrounding the Didact and his machine. The shield is projected by two beams at opposite ends of the room.

John plugs her into a terminal at the end of the platform. Cortana's image appears, now flickering badly.

Cortana screams and her body contorts in pain. Each time she steps to the side, another Cortana comes out of her and disappears into the terminal. John then retrieves her.

John rides a man cannon to another platform.

After fighting through many Prometheans, John reaches the platform's terminal.

John plugs her in and Cortana splits herself again.

One beam powering the shields shuts off. John rides to another platform.

More Prometheans pour in to stop the two of them.

John plugs her into the terminal. Cortana splits herself one more time, then turns to see the shield disappear.

The shield around the Composer flickers out, but the beam of the weapon itself is active. Cut to the Didact, fully armored and standing in front of the beam.

With a wave of his hand, the Composer activates and fires at Earth, seen above. The beam strikes in the North American southwest. Didact rises into the beam itself, while enormous energy from it is seen surging below the machine. Cortana turns to face John. John tries to retrieve her but the terminal suddenly disintegrates, knocking John away and draining his shields.

John stands up and retrieves his weapons. As he runs down the platform, he can hear Cortana whispering in the background. The phrases play at random.

John returns to the original platform via a man cannon and fights off more Prometheans. Midway through, his HUD flickers more violently than more.

The current objective notice appears on John's HUD, but rather than an objective, it is a message from Cortana: "It's alright. But you must hurry…" John reaches the gravity lift at the end and is lifted to the light bridge. He runs down it to reach the machine at the end.

John cautiously walks down the bridge, keeping an eye out for the Didact. Looking into the beam, he sees the Didact inside vanish. He continues to walk forward, then turns and aims his BR85 Heavy Barrel Service Rifle when he hears the Didact speak.

John levels his weapon, but can't see the Didact anywhere. Seemingly alone, he cautiously backs away then continues down the bridge. Behind him, the Didact floats down.

The Didact floats John off the edge of the bridge. John is unable to do anything to free himself. His shield flickers from the constraint.

He tightens his fist, and John begins to choke. Hearing a strange whispering, the Didact looks and sees multiple Cortanas rising from his light bridge.

The Cortanas leap into his armor and form chains of light that hold down his arms. The Didact loses his grip on John, who falls and manages to catch the edge of the light bridge. He looks up.

John struggles to climb up the edge. His shields are down and don't recharge. After looking down at the Composer's slipspace energy below, he pulls himself up and pulls out a Pulse Grenade. The Didact is still struggling to free himself. John dashes toward him and plants the grenade on his chest. The Didact breaks free and punches him away at that moment, but the chains still impede his legs, keeping him from reaching John. The Didact again strangles John using the constraint field, and the Spartan is about to lose his breath when the pulse grenade detonates. The Didact reels from the blast and falls off the bridge, dropping into the swirling energy below (If the player failed to plant the grenade on Didact, Didact will throw John off the bridge, and the game reverts to last checkpoint). John looks down after him then groans as he crawls to the HAVOK bomb. He tires and eventually can only pull himself with his arms. Grabbing the nuke and priming it, he looks up at the beam firing on Earth and decides there's no time to escape. With a loud cry, John punches the bomb to make it immediately explode. Fade to white as the nuke detonates.

John comes to inside a purple bubble, which seems to be made out of hard light. He looks around him then stands on his feet.

Johns turns around and sees Cortana striding towards him. Her body is made out of hard light, and she's now as tall as a real human being. The two of them walk towards each other.

Cortana looks down at the floor a little gravely.

Cortana begins to back away, out of the bubble.

Cortana steps out of the bubble and vanishes forever. Cut to John, staring at where she was as the Didact's ship crumbles around him. Fade to white, then cut to black.

Extra dialogue in the ending scene between Cortana and John-117 was cut. The dialogue was portrayed in the motion capture performance but was not included in the final release.[2]

Concept art of the Composer's shield generator.
Add a photo to this gallery

The Composer in position to fire on Earth.
Add a photo to this gallery 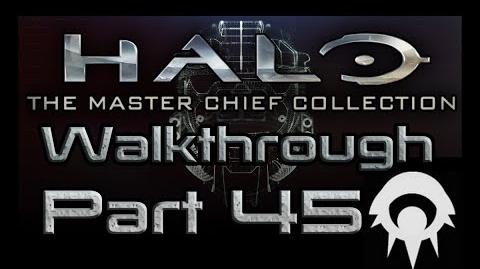 Retrieved from "https://halo.fandom.com/wiki/Midnight_(level)?oldid=1792289"
Community content is available under CC-BY-SA unless otherwise noted.