Missing In Action, better known as MIA, is a casualty classification used by the United Nations Space Command that refers to a member of the UNSC who has been reported missing following a combat mission and whose status as to injury, capture, or death is unknown. The missing combatant must not have been otherwise accounted for as either killed in action or a prisoner of war.

When SPARTAN-IIs are killed, they are reported as Missing or Wounded in Action to create the illusion of SPARTAN Immortality. This apparently helped boost morale for the UNSC.[1] SPARTAN-IIIs are not normally subject to this, as the very existence of the program remains classified. However, at least two were listed as such in accordance with the tradition by Kurt-051.

By the year 2558 the tradition of classifying deceased SPARTANs as MIA instead of KIA was discontinued.[2] 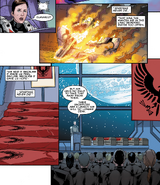 Captain Thomas Lasky announces that KIA SPARTANs will from now on be classified as KIA instead of the traditional MIA.
Add a photo to this gallery

Retrieved from "https://halo.fandom.com/wiki/Missing_in_action?oldid=1792335"
Community content is available under CC-BY-SA unless otherwise noted.