It was first introduced for the Mark IV line of armor in 2535 following testing at the Siófok Firing Range and again in 2551 for the Mark V. The AA variant was originally developed for the UNSC Army's airborne division and incorporates specialized optics along with a head's-up display capable of showing real-time satellite imagery and other information useful for operating in an airborne scenario. Ushuaia's considerable involvement in the UNSC Marine Corps' BDU is the reason the AA variant shares similarities with ODST battle armor.[2] The helmet was used by Kat-B320.

After Reach and Ushuaia was destroyed, the designs were given over to Naphtali Contractor Corporation.[3] It was used by ONI security forces stationed on Skyhooks above both Earth and Luna during the Battle of Earth.[4]

A GEN2 variant of the armor was then quickly prepared for SPARTAN-IV operators. This variant was tested in the Buffalo Breaker Yards and in Mindoro, Cascade. The armor met all the strictures for groundside combat as laid out by the Damascus Ordnance Commission.[3] The GEN2 helmet was marketed to the UNSC Army special forces,[5] and the suit itself was considered for unaugmented members of Delta-Six.[6]

The Air Assault armor was designed to protect the wearer when they were deployed to suborbital facilities like Skyhooks and Space elevators.[3] The helmet also had a number of possible attachments, including an extra piece of armor, a command network module, and a hardened uplink.[7]

GEN2 helmet variants had a long-range comm system.[5] As well, the shoulder pads were designed to be low drag.[3] The GEN2 armor piece could also be used by non-augmented soldiers.[6]

It is available to players upon reaching the rank of Warrant Officer in Halo: Reach at the cost of 15,000 cR. To purchase the Air Assault set in its entirety would cost a player a total of 27,500 cR.

There are three variants of the Air Assault helmet: BASE (primary), UA/CNM (secondary) and FC-I (tertiary) as with all helmets in Halo: Reach. Each helmet has respective prerequisites although players must buy each helmet in a succession before the next can be purchased.

“In late 2552, as the Covenant lay siege to humanity's home system, ONI security personnel were deployed with AIR ASSAULT-class armor. The goal was simple: prevent the enemy from gaining control of the skyhook defense complexes that line the suborbital planes of both Earth and Luna.[4]”

Basic Air Assault armor is unlocked at SR-11 while the VERG armor skin is unlocked through mastering all Vehicle commendations.

The Air Assault helmet seen in the Armory.

The AA helmet as worn by Kat in the Halo: Reach campaign.

Another picture of Kat wearing the modified AA FC-I helmet. 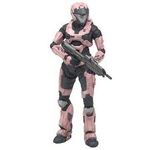 An AA Spartan figure made by McFarlane Toys.

Another view of the The Air Assault helmet.

The FC-I helmet in combat.

Halo 4's AA Variant as seen from behind.

A closer look at the AA shoulder in Halo 4.
Add a photo to this gallery

Retrieved from "https://halo.fandom.com/wiki/Mjolnir_Powered_Assault_Armor/AA_variant?oldid=1796238"
Community content is available under CC-BY-SA unless otherwise noted.