The Mjolnir/JFO armor variant is a type of Mjolnir Powered Assault Armor. It was designed and tested by the UNSC at Beweglichkeitsrüstungsysteme on Earth.

>Beweglichrüstungsystem was home to many projects attached to the Mjolnir program.

>Up-armored variant of the base Mk. V [J] pattern helmet.

JFO LEFT/RIGHT 1,000 cR (Each)
PREREQUISITES: NONE

>Designed and tested at Beweglichrüstungsystem of Essen, Deutschland. 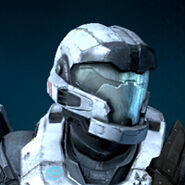 A Spartan III wearing the standard JFO base helmet. 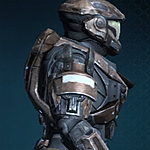 A shot of the JFO right shoulder pauldron.

A female Spartan player with both left and right JFO pauldrons equipped in the Armory.

Concept art of Carter-A259 with knee guards that resemble the JFO shoulders.
Add a photo to this gallery

Retrieved from "https://halo.fandom.com/wiki/Mjolnir_Powered_Assault_Armor/JFO_Variant?oldid=1792414"
Community content is available under CC-BY-SA unless otherwise noted.