Along with the Mark V[M] and Mark VI[A] variants, the Mark V[B] is designed and manufactured by private organizations hired by the UNSC rather than developed by the UNSC specifically, due to numerous problems with funding. The Mark V[B] entered service in 2551 along with the standard Mark V armor set.[1] However, components of the [B] variant were issued exclusively to members of SPECWAR Group Three, where it served as the default Spartan armor. Notable users of the Mark V[B] include Thom-A293 and SPARTAN-B312 (by default).[2]

Price: N/A, Default option
The Mark V[B] helmet is similar to the standard Mark V Mjolnir Powered Assault Armor, with a few key differences. The helmet has a sleeker design, resembling both the standard Mark V helmet and the ODST helmet, and seems to be somewhat of a combination of the two. Whilst the rear of the helmet is similar to the Mark V, the front strongly resembles the ODST helmet's triangular jaw guard and rounded top, with a flatter visor shape.

This helmet is the starting helmet for all players, and is purchased and equipped by default. Currently, there are two upgrades available for the Mark V[B] helmet; the UA (up-armored) upgrade for 750 cR (This is a combination of both of the Beta upgrades); and the UA/HUL, for 1500 cR, which adds an External Hardened Uplink to the right side of the helmet, redesigned from the Beta.

The UA Multi-Threat Mark V[B] chest includes supplemental, lightweight armor plating to the default Mjolnir chest, as well as a belt of grenades. Designed to operate in a wide variety of combat scenarios, the Multi-Threat chest is designed to provide maximum freedom of movement while allowing for additional protection. 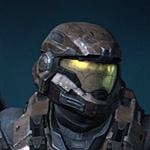 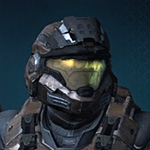 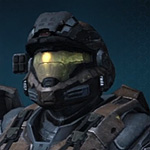 A Spartan with the Mark V[B] helmet.

The Mark V[B] worn by SPARTAN-B312 with a UA attachment.

The base Mark V[B], and its two upgrades.

The Mark V[B] shoulder plate as seen in the Halo: Reach Beta Armory. Note that the pauldron is a part of the FJ/PARA variant in the final game.
Add a photo to this gallery

Retrieved from "https://halo.fandom.com/wiki/Mjolnir_Powered_Assault_Armor/Mark_V(B)?oldid=1805788"
Community content is available under CC-BY-SA unless otherwise noted.