< Mjolnir Powered Assault Armor
View source
watch 02:56
Raise a Floppa - The Loop
Do you like this video?
Play Sound

The Recon armor was developed parallel to the Scout Armor in the Office of Naval Intelligence's Beta-5 Division Ordnance Testing Facility in Swanbourne, Perth, Western Australia. The main purpose of the Recon Armor was to create armor with stealth capabilities and with little or no loss of endurance, specifically by reducing its infrared signature, reflective surfaces, and Čerenkov Radiation emission. A similar helmet was also used in the Recon variant of the ODST battle armor. It is produced by Imbrium Machine Complex after the war, with improved movement stabilizers and adjustable shield distribution channels for versatility during deep-field reconnaissance.[4] It was used by Kilo-Five members Vasily Beloi and Malcolm Geffen.[5]

The helmet has large, rounded features, with a rise along the top of the head with two black triangles pointing out the front of the head on each side of the rise. It has a thin visor and an area of black alloy beneath it that covers the nose, surrounded by armor. The helmet is largely angular with a pair of what look like breathers, on each side of the mouth and a small outdent on the forehead. Marathon symbols can be found on the sides of the helmet.

The chest piece is similar to the Mark VI but instead of being made up of smooth plates reflecting the human body, it is more angular and flat like the other parts of the armor and reflects it with a few small changes. This chest piece, like all armor permutations, is an attachment on to the standard Mark VI armor.

The helmet once again appears in Halo: Reach. It is available at the Rank of Colonel for 100,000 cr. The UA/HUL [3] is only available to those who pre-ordered the game or bought the standard edition in the United States.

The complete armor set appears in Halo 4. Unlockable at SR-26, it includes a chestplate. The helmet appears larger and also bears characteristics to the EOD helmet.

It is produced by Imbrium Machine Complex.

Concept art of the Recon helmet for Halo: Reach. 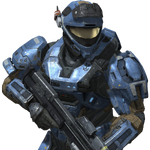 A render of the Recon helmet in Halo: Reach.

The updated Recon helmet for Halo: Reach, shown in a Bungie Weekly Update.

Captain Veronica Dare wearing an ONI-issued variant of the ODST armor with a Recon helmet.

Recon, with the UA/HUL[3] attachment, in Halo: Reach gameplay.

A picture of the basic Recon helmet.

Recon helmet and shoulders in Halo 3 with the Katana chest also equipped.

The Recon helmet variant shown as a Xbox Avatar award. Red for males. Blue for females.

The Recon helmet, as it appears in Halo 4 in a photo released by 343.

First person view of an enemy getting assassinated by a Spartan equipped with a Recon variant helmet.