The Mjolnir V(M) variant was manufactured in the Misriah Armory facility on Mars in 2528, three years after the Mark IV was released in November 2525. Like the standard Mark V, the later model of Security has been upgraded to be compatible with all current generation Mjolnir Mark VI variants.[1]

Unlock: Get a total of approximately 1000 gamerscore in Halo 3.

The helmet's most noticeable feature is the larger, more prominent "figure-eight" shaped visor which looks almost bug-eyed. It bears resemblance to that of a helmet of a modern-day jet fighter pilot. This helmet is inspired by the protagonist of Marathon, although the mouth is covered. The helmet is large with a small raised section on the forehead in the form of the Marathon logo. Wearing the helmet will also add a small antenna and dial to the right shoulder protrusion.

Unlock: Officially, the Security shoulders unlock when the player has attained at least 750 Gamerscore points from Halo 3. However, the shoulders are renowned and well-known bugged items.

The shoulder pieces are quite largely rounded, with an upper center, trapezium-shaped arm guard extending out the bottom and a rounded section above that. It should be noted that this shoulder permutation is prone to a glitch that may cause you to not unlock them until you have 1000 gamerscore; conversely, another glitch has occurred that unlocks the Security shoulders before reaching 750 gamerscore in Halo 3.

The Security Armor does not have a chest plate, although wearing the helmet will give the player a distinct "antenna and dial" on the right side of the backplate. This may be a reference to the antenna John-117 had in the pre-Halo: Combat Evolved trailer. The fact that the Security armor predates the standard Mark V armor may support this.

Unlock: 250,000 cR, and reaching the rank of General are needed to buy the helmet.

The prominent bug-eyed shape has been toned down, and the helmet looks smaller overall. The Marathon Logo has been removed from the forehead.

The shoulders are more rounded than they were in Halo 3. The right shoulder is equipped with a non-usable Kukri in addition the default combat knife.

So far, the right shoulder pauldron is the most popular and the most commonly used piece of armor seen in Halo: Reach matchmaking. 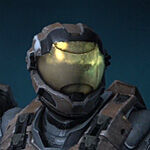 The Security helmet in Halo: Reach 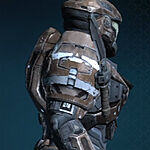 An image of the Player in Marathon.

An Xbox LIVE Avatar with the Security helmet on. 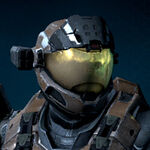 The Security helmet in Halo 5: Guardians.
Add a photo to this gallery

Retrieved from "https://halo.fandom.com/wiki/Mjolnir_Powered_Assault_Armor/Security?oldid=1817833"
Community content is available under CC-BY-SA unless otherwise noted.