This monument and many like it were built by the Forerunners after their final victory over the ancient humans. This small map has central man-cannons, short corridors, almost no cover, and open sightlines which make the location great for a mixture of close and mid-range battle. Monolith harkens back to more classic “Halo” arena-based maps, and its symmetry lends nicely to objective-based modes like Capture the Flag. Monolith is an open battlefield; wherever you look, you will witness the ferocious action that only a small and open map can provide.[4] 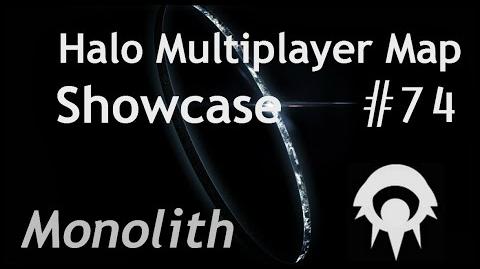 Another shot of Monolith.

View of a planet, on the map monolith.

Concept art of Monolith, with a shadowy figure standing on a ledge.
Add a photo to this gallery

Retrieved from "https://halo.fandom.com/wiki/Monolith?oldid=1792489"
Community content is available under CC-BY-SA unless otherwise noted.