Monument to Noble Team, also known as the Monument of Light, was a part of the "Remember Reach" marketing campaign for Halo: Reach. It can be accessed from here.[1]

Upon entering the site, the following lines were displayed:

The robot arm would draw 54,439 points of light over the next 20 days, a reference to the number 7. When completed, it displayed a picture of the five members of Noble Team standing together.[2]

The site also displayed five points that were accessible by clicking on them. Each point corresponded to a member of Noble Team, excluding Noble Six.[1] 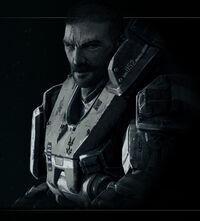 Adorned with battle scars of wars past,
His armor told the story of a true Spartan.
A testament to the conflicts waged over decades,
He inspired Noble in their darkest hour.
And with his hardened voice ringing louder
With each Covenant salvo on his homeworld of Reach,
The destiny of Noble Team was realized
And the survival of humanity secured.
In recognition of this, his endless courage,
We honor him as the fighting spirit of Noble. 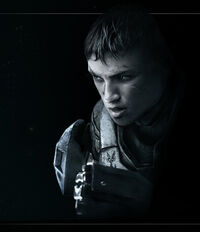 Birthplace: Monastir, New Harmony
Birthdate: 30/01/2530
Strong both in mind and spirit,
Key to the success on Reach.
Her cryptanalytic genius
Cleared Noble's Path.
A true Spartan, armed with an intellect
More dangerous than any weapon.
She deciphered the unknown
To change the course of an entire war.
In recognition of this, her unparalleled brilliance.
We honor her as the true genius of Noble. 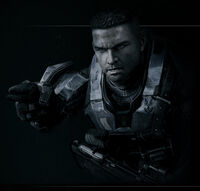 If not for his leadership on Reach.
All would have been lost.
An everlasting testament to fortitude,
Defiant in the face of adversity.
Born of unbreakable will,
It was he who led Noble in its finest hour.
Courageously guiding them to victory,
No matter how high the cost.
In recognition of this, his steadfast resolution,
We honor him as commander of Noble. 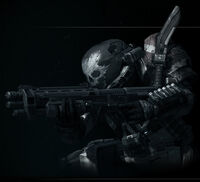 Birthplace: Luxor, Eridanus II
Birthdate: 11/03/2523
Striking fear into all he encountered
While wielding the wrath of a crumbling planet.
Equally vicious and strong,
His blade sharpened by battle.
He fearlessly cut through enemy forces,
Instilling hope in an entire race.
Marked by the skull scratched into his helmet,
He was the last his enemies ever saw of this world.
In recognition of this, his warrior's spirit,
We honor him as the merciless wrath of Noble. 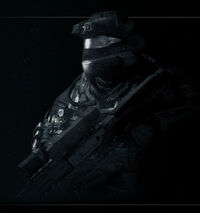 Birthplace: Tyumen, New Harmony
Birthdate: 28/02/2524
Blessed with the talent of a steady hand,
He stood guard over the path ahead.
Patiently combing the surface of Reach,
Marking the location of each target.
Holding his breath before taking that of his enemies,
His rifle echoed with the loud crack of defiance.
Hidden in the shadows,
His was the first shot in our fight for survival.
In recognition of this, his tireless diligence,
We honor him as the vigilant eye of Noble.

Retrieved from "https://halo.fandom.com/wiki/Monument_to_Noble_Team?oldid=1792490"
Community content is available under CC-BY-SA unless otherwise noted.