NMPD HQ is the seventh campaign level of Halo 3: ODST. It is played from Romeo's point of view. Completing this level on Normal or above unlocks the NMPD HQ achievement[1] as well as the Romeo character for Firefight mode.

Chronologically the fifth flashback level, NMPD HQ begins at 19:14, three hours after the squad's insertion into the city. Buck and Romeo have made their way to the top of the NMPD Headquarters building for pickup by an NMPD Pelican dropship. With Dutch and Mickey already on board, the Pelican is shot down by Banshees and crashes on another landing platform. Buck and Romeo must make their way across the upper floors and rooftops of the city's tower blocks to reach their squadmates at the crash site. Once there, they defend the downed Pelican from oncoming Covenant Phantoms and Banshees. Finally, a Brute Chieftain drops from the last Phantom and severely wounds Romeo before the rest of the squad manages to kill it. Lacking air transport, Buck decides to evacuate the squad through subterranean train tunnels leading to the old city, and the squad heads for Kikowani Station.

The cutscene begins with a door in the NMPD Headquarters opening. Buck immediately takes point while Romeo watches his back.

View changes to one of the Superintendent's cameras as he watches Buck and Romeo exit to the outside landing pad.

Buck stops and turns to Romeo.

Buck shakes his head at Romeo as he walks past.

Mickey's and Dutch's NMPD variant Pelican Dropship comes in for a landing as Buck flags them down.

Just as the Pelican Dropship prepares to land, two Banshee fighters come into view and open fire on the Pelican.

Buck and Romeo drop to the floor and cover their heads while the Pelican takes a hit from a Banshee's Fuel Rod Cannon.

The Pelican spins out of view as Buck and Romeo fire at the attacking Banshee fighters.

Romeo looks around for any other enemy aircraft while Buck activates his comm.

Buck de-polarizes his visor, and puts his hands on Romeo's shoulders.

The camera switches to Romeo's perspective.

Turns away from Romeo and pulls the charge handle on his Assault Rifle.

The two go back indoors.

Romeo and Buck sneak outside to the first courtyard.

After a moment of fighting, a Phantom flies overhead.

After another moment of fighting,

Romeo and Buck fight their way to the second courtyard.

If Romeo delays with the Jackals,

After another firefight, the two make their way inside again.

Inside the next room, there is spare ammo and Med-Packs laying around, as well as several dead NMPD officers.

Romeo grabs some more ammo and heals up if needed, then rejoins Buck outside in the third courtyard.

After the first shot is taken,

After the two make their way further into the courtyard,

The two make their way into the fourth courtyard and dispatch all of the Covenant forces and get back indoors.

Romeo and Buck fight their way to a landing pad, Mickey's and Dutch's Pelican can be seen on the rooftop of a nearby skyscraper. There is a bundle of long girders being held up by a crane that appears to be the only way across.

Buck and Romeo get off of the make-shift bridge and rejoin Mickey, Dutch and a couple of NMPD Officers on a rooftop littered with various heavy weapons.

The squad fights a few waves of enemy aircraft consisting of Banshee fighters and Phantom dropships. One Phantom drops off infantry.

After the enemy infantry is dispatched and a couple more waves of enemy aircraft are fought off,

More waves of Banshees and Phantoms are fought off.

More waves are fought off.

The final waves of enemy aircraft are fought off. Only one Phantom Dropship remains.

The Phantom dropship swoops down and drops a Hammer wielding Brute Chieftain.

The chieftain kills an NMPD officer with his hammer and Romeo fires at the chieftain with his Sniper Rifle, collapsing its shield. A shockwave from the hammer sends the sniper back into a barrier and the chieftain, using its hammer's bladed end, brings it down on Romeo's chest. Romeo attempts to shield himself using the sniper rifle, but the blade easily bends it and penetrates Romeo's armor and chest. Romeo cries in pain and starts gasping for breath. The sniper rifle (Mission Beacon) gets caught on the chieftain's hammer and it throws it off, sending the mangled weapon to the streets below.

Giving out a victorious roar, the chieftain prepares to finish Romeo, but Buck jumps on its back and stabs it in the throat with his Combat Knife. As the chieftain chokes and gurgles, while stumbling around the landing pad, Mickey tries to get a clean shot on it with his shotgun but is unable to. Thus, he tackles the chieftain to the ground, manages to knock off the chieftain's helmet/headdress and Dutch shoulder-charges it, finishing the Brute.

Dutch cocks his fists as if boxing while Mickey gets back up. Buck, who is still under the dead Chieftain, waves his hand out.

Dutch and Mickey exchange looks and help Buck with the dead Brute. Buck takes his combat knife out of the Brute's neck, shakes some blood off, which hits Dutch, and cleans it off on his arm. Romeo begins to cough and wheeze and Mickey immediately tends to him.

Romeo de-polarizes his visor and takes his hand off the wound.

Dutch gestures towards the crashed Pelican.

Buck helps Romeo up and uses himself as support for him.

Switches to the Superintendent's camera, who is watching the ODSTs help their injured squadmate.

Fades back to the Rookie. 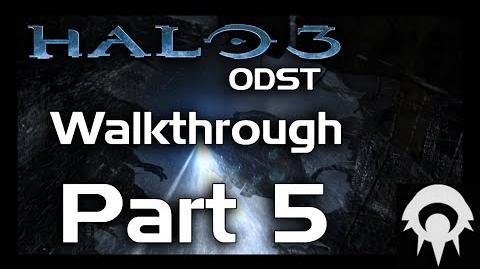 Concept art of Romeo and Buck above the rooftops.

The location of the final standoff.

Buck heading towards his next location as Banshees flies behind him.
Add a photo to this gallery

Retrieved from "https://halo.fandom.com/wiki/NMPD_HQ_(level)?oldid=1816673"
Community content is available under CC-BY-SA unless otherwise noted.