Narrows is a multiplayer map available to Halo 3 and Halo Online.[1]

"Narrows," is a fully symmetrical map, with two opposing bases on each end connected by a Forerunner Causeway. The weapons in each base are identical, with a few minor changes. A man-cannon exists on one side of each base, and propels the player to the opposing base on the other side of the canyon. If players are to enter opposing man-cannons at roughly at the same time they will collide in mid-air and both fall to their death. The main bridge features two different levels for players to combat each other. The upper level is much more exposed, allowing players to be hit from multiple sides and angles. The lower level, connected by an energy bridge is more discreet, and often less hazardous.

Each base features identical weapon spawns and placement. The main differences in each base are due to aesthetics, equipment, and power-ups. Yellow Base players have a Power Drain placed in front of their Man-Cannon, and Blue Base players have a Bubble Shield. Each base features a low point, which is even lower than the "Low Bridge." Blue Base players have an Overshield power-up available, and Yellow Base primarily had Active camouflage, though replaced with an overshield in an update. In addition, this low point contains a Brute Shot (available on both sides).

This bridge connects the two bases, and is generally the area where most of the fighting occurs. The upper bridge features a lot of open areas and not a lot of room for cover. The M41 Rocket Launcher used to be found at the center of this level, but this is now replaced by a Bubble Shield. Separated from the top, but accessible via ramps on the four corners of the bridge, you can find the lower bridge.

This lower bridge offers more protection than the upper level. A rocket launcher replaces the Shotgun spawn, in the center of the energy bridge, which connects the two bases. Players can also find the Sniper Rifle on each side of the bridge. Taking the lower bridge may be a safer and quicker route to each base, but can leave the player vulnerable to rocket or sniper fire. It is also possible to fall off the bridge and land on the cooling core below. You can not stay here for long though, as you will kill yourself after 5 seconds, or the "kill" will go to the Guardians. Careful players can jump down onto a covered ledge and hide on this cooling core without dying, but most players will agree this is not an honest strategy.

The map's design is similar to the outdoors bridges on the Halo: Combat Evolved campaign levels Assault on the Control Room, Two Betrayals and the multiplayer map Gephyrophobia, although Gephyrophobia was noticeably bigger. It also seems to borrow elements from the Halo: CE map, Longest.

For reasons not yet disclosed by Bungie, this map has been slightly altered when playing in Matchmaking playlists.

As of the December 11, 2007 update, two of the Maulers that spawned along the top of the bridge (one on each side) have been removed. The remaining Mauler on each side was re-positioned centrally and slightly back from the original locations, behind a wall offering cover from the M41 Rocket Launcher spawn location. In addition, the Radar Jammer has also been removed, though this happened in an earlier Matchmaking update.

It is believed that this change was caused by near-constant complaints regarding the large number of Maulers in many levels combined with the Mauler's ability to nearly-instantly kill an opponent at very close range. Many people felt that the weapon was unbalanced because of the close-quarters power of the Mauler, especially in CQB-style levels; this is a misconception.

As of August 22, 2008, the Shotgun and the Active camo were also removed and the M41 Rocket Launcher has been moved to the location where the M90 Shotgun was. The Bubble Shield is now on the top where the Rocket Launcher was, and there are two Overshields in the same location.

A view of Narrows "Upper Bridge" and man-cannon.

A view of Narrows "Low Bridge."

Another view of Narrows. 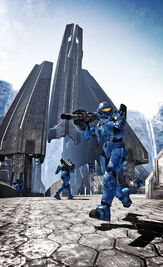 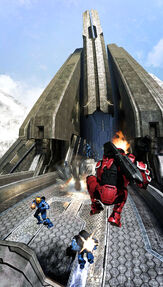 A battle occurs on the bridge of Narrows. 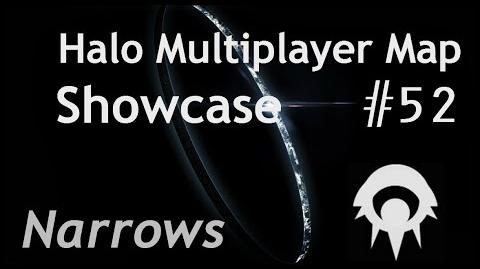