This article is about a Halo: Reach level. For the city of the same name, see [[New Alexandria]].

The Raid on New Alexandria

New Alexandria is the eighth campaign level of Halo: Reach. This level has a unique structure: the three main objectives may be assigned to the player in any order, and the minor objectives between these are randomly selected from a larger pool every time the mission is played. The mission requires the player to fly a Falcon, and the player is able to call in a new one should they lose theirs.

The level takes place later on August 23, 2552, in the airspace above New Alexandria.

Noble Six meets up with the rest of Noble Team and is informed that the Covenant are jamming all communications to Command. The SPARTAN mounts a Falcon and assists Kat in destroying the jammers.

NOTE: All encounters in this level are randomized. The three jammers are the only consistent parts, and the order in which they need to be destroyed may change between playthroughs.

One jammer is located at the New Alexandria Hospital. The troopers sent to destroy it are locked in a fight with the Brutes before Noble Six arrives and destroys the jammer.

Another jammer is located at Club Errera in the Vyrant Telecom Tower. Two pairs of Mgalekgolo stop the troopers, and Noble Six must deal with them before destroying the jammer.

A jammer is also located in a penthouse at the Sinoviet Center. Troopers assigned to destroy it were killed by Drones (save for a single survivor) and Noble Six must finish the job.

As Noble Six destroys the jammers, Covenant Battlecruisers arrive to the city and start glassing the areas further away.

Between destroying the generators, Noble Six must also complete secondary objectives which revolve around assisting the UNSC forces in the city. In single player and 2-player co-op there is one task between each jammer, while 3 and 4 player co-op have two objectives simultaneously assigned to the players. These objectives include

After the last jammer is destroyed, Kat receives orders from Colonel Urban Holland that all personnel are to be evacuated through the Office of Naval Intelligence Headquarters building. However, a group of Shade turrets stationed around the building are preventing any evacuation craft from escaping.

After Noble Six destroys all of the turrets, The SPARTAN meets up with the rest of Noble Team at the ONI HQ. However, they receive an urgent hail from Colonel Holland, informing them that they are being redeployed to Sword Base. Just then, the Covenant begin glassing the city, and the signal is cut off. As Noble Team flees to a radiation bunker, Kat is hit in the back of the head by a Needle Rifle round fired from a Phantom overhead. Her body is dragged into the bunker by Noble Six as the doors close.

Three days later on August 26, after the Covenant forces are gone, Noble Team walks outside to be picked up by a Pelican, with Kat’s dead body in Carter’s arms.

Fades in to Noble Six, sitting alone inside the troop bay of a Pelican.

View switches to the open rear door of the Pelican. Burning skyscrapers and building lights fill the night sky. After staring out for a long time, Six stands up and holsters a Designated Marksman Rifle. The Pelican slows down above a rooftop with two Falcons parked on top. Six steps out and meets Carter while the Pelican flies away.

The two Spartans walk to the Falcons, with one already taking off.

Carter turns and slowly walks away as Six stops in front of the Falcon.

Six gets in the Falcon, and lifts off. A burning skyscraper nearby collapses.

Throughout the level, the player is assigned three jammer locations that they must go to: the New Alexandria Hospital, the Sinoviet Center, and the Vyrant Telecom Tower. There are also "emergency missions" given out after destroying the first and second jammer. The order of all major and emergency missions are randomized.

Six flies to the hospital, sets down on an open landing, and goes inside. A small squad of Grunts and Brutes engages him, supported by a Huragok. After fighting through them, Six reaches the hospital's concourse.

Six finally reaches the troopers, having defeated all of the Brutes.

Six overloads the jammer and heads back to the stairs.

Suddenly, a group of Elite Rangers fly in and engage Six and the Troopers.

Six and the Troopers defeat the Elites. They then move back up to the stairs, engaging an Ultra Elite and some Skirmishers.

Six gets back upstairs and into the Falcon. As it takes off, another skyscraper collapses while a CCS-class battlecruiser flies overhead. After stopping above the city's outskirts, the cruiser starts to glass the area.

No response is given.

Six flies the Falcon to SinoViet Center, fending off some Banshees along the way.

Six finds the elevator and takes it up inside the building. When the elevator reaches its destination -- SinoViet Center's penthouse -- Six steps out and discovers the bodies of the troopers. There are no Covenant present, however.

As Six approaches the jammer:

Six destroys the jammer, triggering a swarm of hidden Drones.

Noble Six either kills or evades the Drones and gets back to the elevator.

Six takes the elevator back down to the platform and returns to the Falcon.

Noble Six flies to the Vyrant Tower and neutralizes the Covenant on the landing platform outside. Six then lands the Falcon, gets off, and heads into the tower itself.

Inside the tower, UNSC Troopers are fighting four Hunters in Club Errera.

Six, with some support from the troopers, eliminates the Hunters.

If all of the troopers are dead:

Last One Out...Turn Out The Lights

An explosion is heard over the COM.

Despite being in an aircraft, Six eliminates one of the anti-air Shades.

When a second Shade is destroyed:

Six lands the Falcon on the platform.

Inside the Olympic Tower, Noble Six joins up with the rest of Noble Team. The glass windows are shattered, and a crashed Banshee can be seen tangled up in some cables. Kat is fixing a comm unit with her helmet on the floor. Jun looks out with a pair of binoculars. Emile sits at the side, sharpening his kukri, and Carter stands against the far wall by the Banshee.

Six looks at him, and loosens his or her hand to show Jorge’s dog tags dangling from it.

Carter walks toward the window, beside Jun.

Carter turns to Kat, knowing she is responsible for the leak.

Carter looks out to the city when beeping and static from the comms breaks the silence.

Carter walks toward the window as Jun notices something through his binoculars, and leans forward.

Covenant ships begin glassing the nearby area, creating a large shockwave. The Noble Team members standing up are thrown to the ground as the explosion destroys the windows and pressure waves force air into the building. Switch to Kat's view.

The Spartans get on their feet, and Kat picks up her helmet. They run towards two elevators. Carter, Emile and Jun take one while Kat and Noble Six take the other one. Kat closes the elevator door and starts it, though she misses the button at first, having been partially blinded by the explosion. The elevators rush down the building as Kat puts on her helmet.

Carter’s elevator stops first and the three Spartans rush out.

Six and Kat rush out from their elevator as the other three approach the bunker’s entrance.

Carter, Jun and Emile reach the bunker’s entrance with Six and Kat close behind.

Kat's sentence is cut off as a Needle Rifle round pierces her helmet from above, leaving a hole in her faceplate. Kat falls to the floor, killed instantly. Six catches and holds her body, takes her holstered pistol and begins to shoot at the Field Marshal in the previously unnoticed Phantom above them. The others come to assist with Assault Rifles, but the Phantom flies away. Six throws away the emptied pistol and drags Kat’s body into the bunker.

Note: At this point, the game's subtitles show several lines of dialogue being said by civilians in the darkness, but none of them are heard in-game.

Fades in to Noble Team, led by Jun, walking out to the destroyed and glassed city. Kat's body is cradled in Carter’s arms. Jun throws a signal flare to the ground, and waves as a Pelican slowly comes into view for extraction. 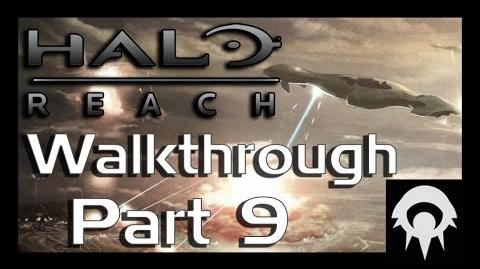 A UNSC Army trooper gunning down a Banshee. 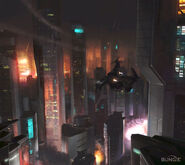