and for the live-action series bundled with Halo: The Master Chief Collection, see [[Halo: Nightfall]].

Tip of The Spear

Nightfall is the fourth campaign level of Halo: Reach.[1]

The mission involves Noble Six cooperating with Jun-A266 (Noble Three), in a series of stealth-based encounters at night, the purpose of which is to recon Covenant Forces in the colloquially named 'Dark Zone'. They first eliminate a few guards posts, and then encountering a native creature of Reach, the Gúta. They then meet a few militia troopers attempting to recover smuggled UNSC weaponry at a waterfront. The militia troopers gave the Spartans information about a hydro plant further into the dark zone. There they discovered a Covenant pylon, which was generating the dark zone. Jun placed a det-charged inside of it to avoid detection by the Covenant. After proceeding further into the dark zone and eliminating the Covenant troops in the area, the two Spartans discovered a Covenant landing zone. Kat receives the visual and tells them to retreat so they can prepare for the next day.

The camera fades in on a cliffside at night.

A Phantom flies by with its search light on. Jun-A266 emerges from a concealed position behind a rock as the dropship passes. He nods to Noble Six, who follows Jun along the cliff edge.

Jun and Six head further along the ledge, Jun reaches a boulder and starts to climb it.

Noble Six slides down the ledge to the ground below.

Six heads up along another ledge. An Elite stands watch over the area, back facing them, while a few Grunts sleep nearby.

Or if you've engaged prior to Kat's clearance...

After eliminating a few of the Covenant troops, a Phantom shows up.

Jun and Six eliminate the rest of the Covenant in the area and continue on a trail behind the buildings, going further into the complex, soon finding an area with more Covenant troops.

The Covenant in the area are quickly eliminated. Jun and Six find a trail leading away, with more Covenant troops advancing.

After dealing with the enemy troops, Jun and Six continue down the trail.

Jun and Six reach a clearing where some native large creatures are attacking Covenant troops.

After eliminating the Covenant, the creatures notice Jun and Noble Six, and begin to charge them.

The creatures take sustained gunfire from both Jun and Six, but eventually fall.

Jun and Six continue on, soon finding another trail.

While taking the trail they come across several Moa, soon hearing gunfire.

The trail opens up to a pumping station. Several militia are under attack by Covenant forces.

After the Covenant troops in the area are eliminated, the group gathers around a couple briefcases.

A Phantom shows up, and the group moves to defensive positions.

After dealing with the hostiles, a second Phantom shows up.

After eliminating the hostiles, yet another Phantom shows up.

If all of the militia are killed...

Eventually, they eliminate the final wave.

The troopers lead Jun and Six to the riverbed.

The Spartans continue down the riverbed.

The Phantom passes them by.

They continue on, eventually reaching the plant, which is under Covenant control. A Covenant pylon is seen near the plant.

They neutralize the guards on the bridge, attracting the attention of the other Covenant in the area.

After eliminating the Covenant forces in the area, Jun heads for one of the pylon's legs.

A Phantom shows up and drops off a pair of Hunters, followed by another Phantom with an Elite SpecOps team. They are eventually defeated.

As they advance further in, they encounter more Covenant troops and several more Shades. Soon, a Covenant corvette is seen holding position on the other side of the rock wall.

Eventually, the Spartans and militia clear the area of hostiles.

Jun and Six are shown crawling forward. A massive Covenant landing zone is shown ahead of them in the distance. 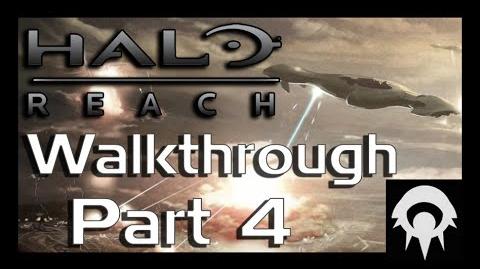 A screenshot of the level.

Noble Six and Jun standing atop a cliff.

A Sangheili standing guard while a Phantom passes by.

Noble Six sneaking up on the Sangheili.

Jun and Noble Six encounter a Gúta, one of Reach's native creatures.

A Phantom over a Covenant outpost.

Another general view of the outpost.

Noble Six in combat with a Mgalekgolo.

Noble Six commandeers a Forklift while under fire by a Mgalekgolo.