Noble Actual is the first campaign level of Halo: Reach, consisting entirely of a cinematic cutscene involving SPARTAN-B312's introduction to Noble Team and the briefing for the game's first mission by Colonel Urban Holland.[2]

Several views of a glassed Reach are shown, first the entire planet, then closer shots from low orbit and finally, from near the ground, facing a towering mountain. Its tip has been divided in two by the glassing. A crashed UNSC frigate can be seen on a hill to the right. The camera moves down to reveal a severely damaged helmet lying on the smoking ground.

The screen fades to white.

Cuts to first-person view of SPARTAN-B312 staring into the visor of the same helmet, before pulling it on.

Zooms out to the Warthog SPARTAN-B312 is riding in, on the surface of Reach, towards a UNSC outpost. Two UH-144 Falcons flying in above the Warthog. Text shown in lower right corner of the screen:

Both Falcons land in the camp, and the Warthog pulls to a stop. Noble Six gets out of the Warthog, and moves toward a building. The Warthog turns and drives off after dropping Noble Six off at Noble Team's command post.

Jun-A266, sitting outside a Falcon's passenger cabin, watches as Noble Six passes by, while placing rounds into a sniper rifle magazine.

Carter-A259 is shown from behind, watching a holographic computer screen displaying Holland's portrait and other information.

Noble Six reaches the door, and stares at Emile-A239 sharpening his kukri against his shoulder pauldron, and attempts to enter, before being stopped by Catherine-B320, blocking Noble Six's path with her prosthetic arm.

Carter and Jorge-052 turn to look at Noble Six.

Carter turns back to the screen.

Jorge and Emile stand up. Carter grabs his helmet from the table and turns to face Noble Six.

Jorge and Emile start moving out. Kat joins them by the door. Jorge and Kat have put their helmets back on.

Cuts to the Spartans exiting the building, with Noble Six next to Carter, with Kat, Emile (who sheathes his knife), and Jorge walking side by side in front of them, towards the Falcon. Carter puts his own helmet back on as he continues to speak to Noble Six.

The Spartans reach the Falcon, with the other three moving to one off screen, and Noble Six and Carter getting into the one where Jun is already waiting, his helmet already back on.

Carter signals for the other Falcon to get airborne.

The Falcons take off and start moving toward a mountain range in the distance. A Warthog equipped with a M41 LAAG .50-caliber rear-mounted turret drives past in the foreground. 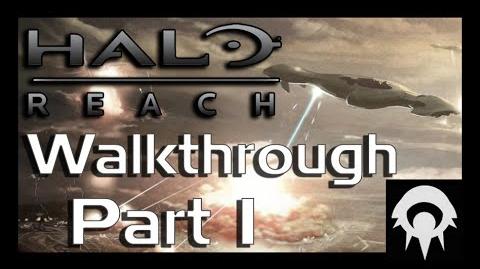