Were you looking for the black body suit, a vacuum-enabled suit of light armor?

The ODST battle armor, or Battle Dress Uniform (BDU for short) is a suit of combat armor worn exclusively by the Orbital Drop Shock Troopers, the special-operatives of the UNSC Marine Corps.

The ODST Battle Dress Uniform is the signature piece of equipment used by the Orbital Drop Shock Troopers - the armor is vacuum-rated, capable of Extra-Vehicular Activity for fifteen minutes.[3] The armor provides numerous advantages in the field, including ballistic protection, temperature control, as well as thermal insulation against extreme temperatures experienced during atmospheric entry and thermal protection from Covenant energy weapons.

The ODST Armor has gone through several design changes since the start of the Human-Covenant War. The current version incorporates technology initially developed for the Mjolnir Armor. This includes CTCs for body armor, titanium and ceramic composite armor plating to give the user added protection - along with HUD and Communications Systems to give more situational awareness to the wearer.[4]

The ODST BDU has been in use for well over 50 years by the 105th, and remains unmatched in its ability to protect its wearer over other BDUs during the toughest operations. The BDU excels at providing more protection against small arms fire than other infantry body armor, and also excels at allowing a trooper to conduct Military Operations in Urban Terrain without the slightest chance of being detected in dark locations.

The BDU's stealth capability is partly thanks to its black and gray camouflage patterns on the legs, boots, gloves, chest, helmet and undersuit - these urban camouflage patterns are optional; without the camouflage panels, the BDU is black. On the left shoulder pad of every ODST is a UNSC MED REF patch.[5][6][7] This patch contains basic medical information about the trooper, and allows a UNSC certified medic to gain a quick medical reference to an ODST wounded in the field. Despite the armor's obvious advantage over standard infantry armor, it is still vulnerable to Covenant energy weapons, larger armor piercing rounds, as well as large explosive devices.

The ODST battle dress uniform is made up of several different components and layers that make the suit what it is, while technology from other projects across the military have been incorporated into the suit, ODST equipment still has proprietary technology that has not been adopted into other equipment for the military.

The ODST helmet is made of titanium, coated with a heat resistant material to help disperse heat - the inside is lined with black padding to provide comfort when the user is wearing it. The helmet's faceplate is made of a strong, glass-like material with the ability to polarize. When polarized, the helmet's faceplate has a silver blue color to it, and obscures the wearer's face completely. It also has a communicator in it.

The helmet provides excellent protection against small arms fire and small explosive attacks. The helmet is also essential in providing an ODST the ability to perform EVA and also provides a Heads-up display, giving the wearer basic information including a targeting reticle, weapon information, ammo capacity, and basic health readout. The newest version of the helmet integrates with the user's standard Neural Interface to provide more tactical data to the HUD. Helmet integrated neural interfaces is another piece of technology that has seen widespread adoption from Project Mjolnir. Along with this state-of-the-art equipment, the helmet is also equipped with its own thermal imaging and motion sensors.[8] The Mjolnir Powered Assault Armor/AA variant was developed as an improvement of the ODST helmet, indicating intended use by ODST personnel as well as SPARTAN-II or SPARTAN-III teams, ultimately it was used exclusively by Army airborne units.[9]

ODST armor is compatible with several upgrades, including Up-Armor plates, a Command Network Module, a Hardened Uplink Module for MILINT acquisition, and a CBRN module for operations in hazard zones. This has only been seen used on SPARTANs who use the ODST helmet, however.

The Visual Intelligence System, Reconnaissance or VISR, is issued with the ODST helmet. The VISR proprietary data management suite enables a user to link into UEG, CAA, and UNSC infrastructure systems at the local, national, and global levels - however actual access level is administered on a need/rating basis.[10] This allows the user to store and review mission content up to 610MB combined, the system also provides street level navigational data, and receive secure real-time mission data. In addition, every current issue helmet ODST BIOS A29.817941B.01 or later is equipped with low-light vision enhancement, which outlines hostile units in red, friendlies in green, weapons in blue, and objects of interest in yellow.[6]

The rucksack issued to ODSTs is, for all intents and purposes, an armored backpack that attaches to the back of the armored vest. The rucksack comes in a number of different variants. The main purpose is storage, which allows a trooper to store equipment, ranging from ammunition, to medical supplies, to explosives, to battery packs which provides power to any equipment an ODST may carry, and communications, which houses the necessary radio and satellite gear that an ODST squad requires to report in to their superiors. For longer missions, ODSTs can carry larger rucksacks with enough supplies for two weeks of operation without external resupply.[11] Rucksacks have integrated magnetic holding devices to allow for external back mounting of additional equipment. Equipment with magnetic properties, such as longer weaponry, can be carried externally over the rucksack eliminating the use of extra straps or slings.

The ODST body suit is made up of several different layers and materials, the inner layer of the black-gray undersuit is made up of Kevlar material to aid in protecting the wearer from small arms fire, the inner layer also contains a heating and cooling system which regulates temperatures to keep the user warm or cool depending on the weather conditions - the heating and cooling system can also match infrared signatures of the current weather as well to allow an ODST to go undetected in hostile locations.[8] The outer layer of the undersuit is coated with a heat resistance material to aid in reducing temperatures experienced during orbital drop, and against Covenant Plasma Weapons. The body suit also doubles as a pressure suit to allow an ODST to perform EVA. The outer shell layer is comprised of Titanium and Ceramic composite armor plating that covers the chest, shoulders, legs and feet.

While the standard ODST BDU is fully capable for any role, there are specialized variants of the BDU - these suits are specifically issued to a specialist of a certain field to provide them certain advantages during an operation. As such, specialized gear is only available by Mission Conditional Requisition (MCR). Depending on mission requirements, an ODST operative may request either additional, or variant equipment that ranges from helmet attachments, gloves, battery, equipment or communication rucksack. The following is the specialized battle dress uniforms currently in use by the Navy.

The ODST battle helmet is available as an armor permutation in the Halo 3 Multiplayer component. The SPARTAN version of the helmet differs from the standard version in the polarization color of its visor; regular ODST helmets have blue/silver polarization, while the Mjolnir ODST helmet retains the gold electroplating possessed by most Mjolnir armor. It is attained and unlocked by the Spartan Graduate Achievement, or by earning 5 XP in Matchmaking.[4]

The shoulder pauldrons, breastplate, and helmet of the ODST armor are also available for purchase in The Armory in Halo: Reach.[14][15]

GEN2 ODST armor is available as an armor permutation in Halo 4's multiplayer. The armor can be acquired through the Infinity Armor Pack as a part of the Champions Bundle.

A group of ODSTs.

A squad of ODSTs aboard a Pelican.

Cinematic render of an ODST.

An ODST holding a sniper rifle on the mission Delta Halo

Private S. Hartley during the Battle of Sector Six. Note the orange visor.

Early concept art of an ODST in his battle armor.

A study of the ODST ballistic battle armor. 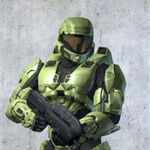 The Mjolnir Mark VI with the ODST helmet.

ODST troops in the Battle of Installation 00.

A dead ODST in his battle armor.

Concept of ODSTs fighting in the skyscrapers of New Mombasa.

The different ODST armor permutations worn by the members of Alpha-Nine.

Concept art of the Sharpshooter variant

Concept art of the Recon variant.

Concept art of the ODST helmet.

A recreation of the ODST Mjolnir armor using Vanity. 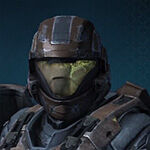 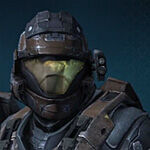 The ODST helmet with the UA/CNM attachment. 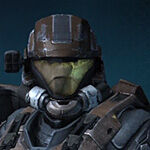 The ODST helmet with the CBRN/HUL attachment.

An ODST helmet on a suit of Mjolnir armor in the Halo: Reach Multiplayer Beta.

A dead ODST in his battle armor.

A group of ODSTs. 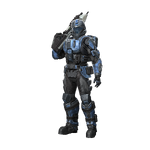 The armor of Ethan Graves.

The armor of Marcus Hudson.

An Xbox Live avatar award unlocked via Waypoint and an achievement.