For other uses, see Sword base (Disambiguation).

ONI: Sword Base is the third campaign level of Halo: Reach.

The level begins on July 26, 2552 near Sword Base, an Office of Naval Intelligence research facility. The facility is located on the Babd Catha Ice Shelf in Eposz, near one of the poles of the planet Reach.

Noble Team is deployed to Sword Base after a Covenant corvette begins attacking the facility. Due to the sensitive nature of the facility, orbital rounds are prohibited, forcing Noble Team to go groundside to defend the facility.

Two Falcons drop Noble Team around Sword Base. After Kat-B320 and Noble Six clear the courtyard outside the facility, they are ordered by Sword Control to proceed to the main gate. However, they are stopped by a pair of Wraiths, which Noble Six eliminates with a Target Locator.

A Pelican then drops off a Warthog, which Kat and Noble Six ride to reactivate a COM array to contact Command and an anti-air gun to help clear the skies. After completing their task, they meet up with the rest of the team at Sword Base.

They fight their way up through the atrium to the top floor. There, Noble Six helps Emile destroy several Phantoms and Banshees over the airbase making it possible for a pair of Longswords to move towards the SDV-class heavy corvette, lock onto it, and have it destroyed by a MAC round from orbital defenses.

Noble Team is called back into Sword Base by Dr. Halsey, who reprimands Carter for not pursuing the Sangheili at the Visegrád Relay. She explains that the Sangheili were most likely part of an artifact retrieval strike team, and that the notes stored at the Visegrád Relay held very important information. Kat then hands over the data module she retrieved from the station. Carter and Halsey exchange barbs, and Noble Team leaves as Dr. Halsey examines the data module.

Screen fades into Babd Catha Ice Shelf, two UH-144 Falcons, callsigns Kilo 33 and Kilo 34 head toward the coast, Noble Two is shown slipping a chip into a data pad and typing something.

The Falcon lowers close to the ground. Kat and Six jump out.

Kat, Six, and a few troopers engage and eliminate some Covenant troops on an upper walkway.

The two Spartans head north to a courtyard, where they engage a significant number of Covenant troops.

After clearing the courtyard, the Spartans head down a ramp where they engage several Skirmishers, eventually making it down to a gate.

Get the Hell Off My Lawn!

Noble Six takes the Target Locator, and the Spartans then head out of the base. The Covenant Corvette opens fire on the base. A damaged M831 Troop Transport is seen attempting to escape from two enemy Wraiths.

The Warthog is soon destroyed by one of the Wraiths.

A Pelican is seen coming towards them with a Warthog.

After heading further west, they are engaged by Covenant forces, soon eliminating them.

They arrive at the base to find it under Covenant control.

After eliminating the Covenant in the area, Noble Six heads into the two-floored building next to the AA gun. He/she finds the reset control on the roof of the building, and activates it. The AA gun immediately opens fire on the Banshees and Covenant dropships around the Corvette.

A Pelican delivers a Gauss Warthog, facing the direction the Spartans must go to next.

The Spartans soon arrive at the station.

The station is also occupied by Covenant forces, including a Revenant.

Noble Six searches the buildings, eventually finding the switch, and activating the generator.

Noble Six soon finds the comms array in an adjacent building and activates it.

The SPARTANs arrive back at the gate to find it under attack by several Covenant forces, including more Revenants, soon eliminating them.

Once inside, Kat and Six head back up the courtyard, which is once again occupied by the Covenant.

Noble Six activates the elevator to take them to the security office. Midway up, an explosion rocks the elevator.

Kat and Six soon move into a multi-level room, where Noble One, Three, and Five are engaging Covenant troops.

Jorge and Six make it up to the top floor, which is in ruins from an explosion.

Six goes through a doorway to the top floor, where there is a massive hole in the building. The Covenant corvette is holding position just outside.

Noble Four, Five, Six, and other Army troopers engage several Banshees, and a Phantom, which drops off a pair of Sangheili.

The Covenant air and ground troops are soon eliminated.

Two Longswords fly towards the corvette, which is attempting to flee. Noble Six watches as the Longswords follow the corvette for a distance, but soon break off. A MAC round suddenly penetrates the corvette from above. Its engines flicker, and it loses altitude. The view changes to Six. Jorge emerges from the shadows, approaching Six.

The corvette crashes into the lake.

Jorge, Emile and Six walk away. The corvette is shown in the background sinking into the lake.

They soon arrive at the science wing, where Carter is talking to Dr. Halsey, who is behind a shield door.

Halsey pauses mid-sentence as she notices Jorge entering the room.

Jorge and Noble Six look at his armor.

Emile and Jun look up at Dr. Halsey.

Kat walks over and places the module in a container in the shield door.

Halsey pulls the container towards her side of the shield door and retrieves the module.

Carter and Kat start to leave, while Halsey begins to examine the module. 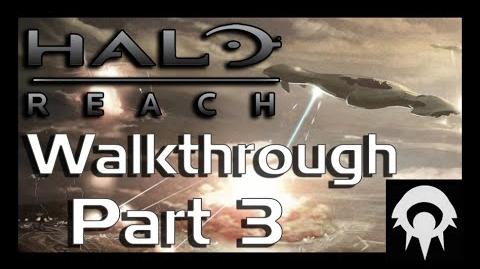 Concept art of the 'Garage' area of Sword Base

The central area of the Base

Concept art of the base

A screenshot of the level.

The interior of Sword Base.

A Spartan III battling against a Covenant Phantom.