ONI Alpha Site[1] is the sixth campaign level of Halo 3: ODST. It is set in the ONI Alpha Site in New Mombasa.

The level is set two hours after the Squad's drop into the city, and four hours before the Rookie's awakening, from Dutch's point of view. He and Mickey are defending the ONI facility with the help of the city's Superintendent, NMPD, and Marine forces.

Completing this level on Normal or above unlocks the ONI Alpha Site achievement as well as the Firefight map Alpha Site.

The level opens as Mickey and Dutch are setting demolition charges to destroy the bridge leading to the complex to prevent the Covenant forces from accessing it. After the charges are armed, an NMPD officer commands the Superintendent to unlock a keypad on a bridge toll booth so they can remotely detonate the charges. The AI is hesitant at first, but eventually lets Dutch destroy the bridge. After this, they fall back deeper into the facility, fighting off more waves of Covenant until they are forced to retreat into the ONI building itself. Dutch and the NMPD officers fight off the squads of Brutes, Grunts and Jackals that continue to push into the building. Eventually the fight is brought up to the roof of the facility, where the final Covenant infiltrators are killed. A Pelican picks up Dutch and Mickey, and the level ends as Mickey remote detonates the charges in the ONI facility, destroying it, and awakening a Drone Hive below.

Dutch watches as a Wraith moves into position, while Mickey arms a detonator.

The Wraith starts to open fire.

Dutch looks down the bridge to a watchtower with an NMPD Officer in it, which almost gets hit by a plasma mortar.

The two run down the bridge, another Wraith moves in and starts to fire.

The view switches to Dutch, who takes cover behind a destroyed Warthog, a plasma mortar lands a few feet in front of him.

Dutch looks back at the Wraiths starting to move up to the bridge.

A squad of Marines are trying to hold the Covenant back.

If Dutch turns to fight the advancing Covenant horde:

If Dutch walks past the first charge:

If Dutch walks past the second charge:

After the second charge is armed, two Banshees join the fight.

If Dutch doesn't go up the ladder to the tower

Dutch heads for the tower and goes up the ladder.

The Superintendent gives off a chime.

If Dutch doesn't trigger the charges yet:

If some Covenant succeeds in crossing the bridge:

Marine: Kill their infantry! Don't let them cross the bridge!

Dutch or the NMPD Officer triggers the charges:

The bridge is destroyed, killing all Covenant troops still on the bridge.

Mickey, Dutch, the Marines and the NMPD Officer make their way under the wall.

If Dutch doesn't go under the wall:

The group make their way up the stairs, to the courtyard.

Mickey and Dutch make their way up the hill, which is being defended by more NMPD Officers and Marines.

Soon, more and more waves of Covenant are dropped off.

The ODSTs retreat into the building's interior. NMPD Officers go outside in a last effort to hold back the Covenant. Dutch and Mickey go to a group of officers in the center of the complex.

(Cutting noises and sparks appear on the sealed doorways.)

The doors explode. Brutes can be heard giving out battle cries.

During this Mickey and the Sergeant will say various lines, so the player knows to change direction.

After defeating a few waves, the Covenant start dropping in troops behind Dutch and Mickey.

Soon the Covenant reinforcements are defeated.

An NMPD Officer arrives with an elevator.

Dutch activates the elevator, and they slowly make their way up.

NMPD Officer: "Evac bird's gonna meet us on the roof."

Mickey: "I love blowing crap up Dutch, but this situation sucks.

However, on the way up they are soon engaged by a swarm of Yanme'e.

They soon defeat the Drones and make it to the roof, where a Phantom is dropping off a pack of Jump Pack Jiralhanae.

After the Phantom leaves, the evac Pelican arrives, and helps the ODSTs with the enemy reinforcements, which are soon defeated.

If the player doesn't board it:

If the player still doesn't board it:

If the player still doesn't board the Pelican:

or, with IWHBYD skull on:

As soon as the player boards the Pelican, the level ends.

Mickey and Dutch board the Pelican, remove their helmets and take a seat. The NMPD officer on board looks at them.

The Pelican lifts off and departs the ONI building

Mickey points to the ONI Building, and starts to count down from three on his fingers. When he reaches zero, he detonates the charges, destroying the building.

The Pelican flies away as the view changes to a Superintendent camera, the avatar gives a confused then angry face as the building is destroyed. 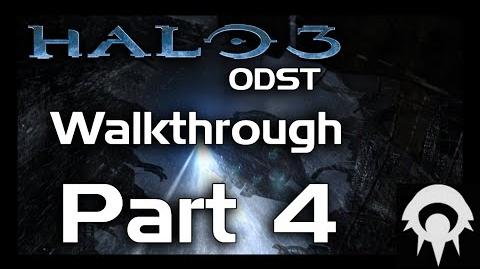 This mission's beacon is the remains of a M168 Demolition Charge.

The interior of the ONI building.

Mickey and Dutch plant demolition charges on the bridge leading to the ONI complex.

View of New Mombasa out of bounds.

A Panorama of the first part of the level.

Covenant forces attempting to invade the entrance of the facility.