The ORION Project was an Office of Naval Intelligence and Colonial Military Authority super-soldier program aimed at security and counter-insurgency operations.[1] It was originally launched in the 24th century, but was deemed too cost ineffective. A later relaunch occurred during the Insurrection. Though effective, it eventually met a similar fate to the original program.

Later, following the success of the Doctor Halsey's SPARTAN-IIs, the remaining ORIONs became colloquially named as SPARTAN-Is, and this name took root the extent that ORIONs such as James James referred to themselves as SPARTANs. The ORION Project itself was also retroactively dubbed the SPARTAN-I Program, and the children of the members of the ORION Project were sometimes called SPARTAN-1.1s.

The ORION Project was a Special Operations Force in the UNSC. Administratively, the ORION project was under the control of ONI Section-III, the Special Projects section of ONI's Beta-5 Division. However the Orion super-soldiers themselves were under the operational authority of Naval Special Warfare Command/Naval Special Weapons.[3] The ORION Program was an all volunteer force composed of the most skilled members of the Marine Corps[2] and special forces branches of the military[4] — the Orion super-soldiers performed specialized, high-risk operations including: counter-insurgency operations, unconventional warfare, direct action and black operations. The ORION program was headquartered on one of the many orbital docks on Reach,[4] and in the height of the program had 300 active duty personnel.[2]

The members of the ORION program were all augmented soldiers, using new training methods and the latest breakthroughs in biochemical developments. Augmentations to the Orion super-soldiers include muscular enhancement injections, pulmonary respiratory enhancements, retina-inversion injections, and cochlea enhancement tuning.[5] In addition to the physical enhancements, mental augmentations were performed to enhance brain functions[2] including enhanced learning capabilities to allow a subject to learn at a faster and higher rate and enhanced motor skills to improve body movements. The Orion training regime was very difficult and included many tests both mental and physical, including work done in the lab. All sixty-five initial volunteers[2] made it through the training and augmentation procedures and were placed on active duty some time after completing their training. After their initial deployment and success funding for training the next group of Orion super-soldiers was approved, and within a few years the Orion Program had 165 active duty personnel.[4]

The beginning of the Orion Project dates back to the 24th century, when the newly-formed UNSC began developing bio-engineering protocols and experimenting with biochemically altering human soldiers. Although these performance enhancing substances were very primitive and nowhere near as effective as the chemicals used to augment the soldiers of the SPARTAN Programs, they did show promise and gave results and serve as the catalyst for future endeavors. Since then, human soldiers have used performance-enhancing equipment for decades.

With the formal establishment of the Inner colonies in 2390,[6] mankind's expansion era had begun, and the next century would be an important boom for Humanity. As mankind expanded, the political and military power that the UEG desired to maintain began to diminish, and sentiments of self-rule and political independence spread among the colonists.[6] As the Colonies began to separate themselves from Earth, the UNSC took every step necessary to keep its grip on the Outer Colonies that were developing during this time. By the 2400s, Outer and many Inner colonies soon began to question the often-draconian interference of the UEG in what was originally intended to be a confederation of independently governed worlds.[6]

The relaunch of ORION

As the civil wars began to intensify in the Outer and Inner colonies, many of the CMA's resources were taken over by the UNSC and ONI. Using data supplied by ONI, the CMA relaunched ORION in secrecy in response to insurgent attacks in the colonies. The project began in January of 2491[7] with sixty-five test subjects, after completing their training an additional one-hundred volunteers were accepted into the now dubbed SPARTAN program. The first Orion deployment occurred in January 12, 2496 [1] as part of Operation: CHARLEMAGNE, during this operation the full unit of Orion super-soldiers were deployed to recover the sub-orbital transit station over Eridanus II. This marked the only time a full unit of Spartans were ever deployed in the entire program — they completed their mission with only a single casualty and without being seen.[2] The resulting success of CHARLEMAGNE, and tales of the military deploying advanced super-soldiers were born, this became fuel for a range of conspiracy theories and media speculation. As the legend of the super soldiers continued to grow they gave birth to a new round of propaganda efforts by ONI in the coming decades.

As the war against the Insurrectionists continued to escalate, the UNSC stepped up their counter-insurgent activities under Operation: TREBUCHET, created in response to the defector UNSC Marine Colonel Robert Watts.[8] The Orion super-soldiers became a key member in the fight against the rebel attacks across the colonies, taking down insurgents as soon as they cropped up — however as time went on the insurgent attacks became more effective, and insurgent personnel more difficult to root out, and over the ensuing decades, became more organized and difficult to combat.

In 2502, Operation: KALEIDOSCOPE—part of the UNSC's greater plan to pacify the entirety of Human-colonized space, was put into action. Many Orion super-soldiers were deployed to take down insurrectionist strongholds, but one of the key goals was to eliminate Jerald Mulkey Ander, the leader of another major insurrectionist faction, the Secessionist Union. Although KALEIDOSCOPE successfully dealt a heavy blow to the insurgents, the overall strategy of KALEIDOSCOPE failed to pacify the colonies. Operation: TANGLEWOOD would be the last operation the Orion super-soldiers participated in, the exact nature of this operation is not known other than that it was to combat insurrectionist forces.[2] In 2506 The Orion project was quietly deactivated and the surviving members reassigned to other special operations units in the field. However these soldiers often exhibited side effects as a result of their augmentations and many members were discharged from the military as a result of mental instabilities. In order to ensure absolute secrecy, the side effects caused by SPARTAN-I augmentations are masked as a disease known as Boren's Syndrome — many Orion super-soldiers go on to retire, some eventually have children, but due to their augmentations their children must also be given some form of injections to ensure no defects.[9][10]

The children of the SPARTAN-Is are sometimes referred to as Spartan 1.1s. There are sixteen Spartan 1.1s, including Janissary James and Kevin Morales.[14] Due to their parents' augmentations, the Spartan 1.1s had to receive injections in order to ensure normal growth without defects. A small vigilante group of SPARTAN 1.1s, seemingly led by Kevin Morales, formed a plan to fight the Covenant. However, before this could come to fruition, the Covenant invasion of Earth began.[15] Their whereabouts following the attack on Earth are unknown.

Next to nothing is known about the ORION/SPARTAN equipment, it can be assumed for the most part though that they did have equipment as good as any other special units in the UNSC, one piece known for famously killing Jerald Mulkey Ander is the Model 99 Special Application Scoped Rifle. 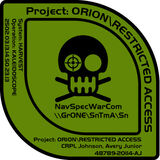 Each SPARTAN-I operatives mission record includes a variant Orion insignia, this insignia contains basic information about the mission and person.

A sketch of a variant of the ORION insignia by Dr. Catherine Halsey. 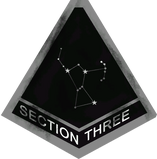 An ORION Project insignia found on a lighter owned by Johnson