The Open Season medal resembles three green and gold slugs sitting on top of a five pointed bronze star; it is awarded to individuals after killing 10 opponents in a row without dying with a shotgun on multiplayer matchmaking, in Firefight, and in Campaign in Halo: Reach. Melees with the shotgun do not count toward the medal. The Open Season medal is the last of the shotgun spree medals in Halo 3 & Halo 3: ODST, and the second of the shotgun spree medals in Halo: Reach. This medal can be awarded on any gametype containing a shotgun. 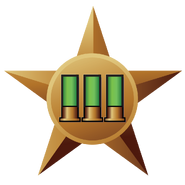 The Open Season medal as it appears on Halo 3 and Halo 3: ODST.
Add a photo to this gallery

Retrieved from "https://halo.fandom.com/wiki/Open_Season_medal?oldid=1826025"
Community content is available under CC-BY-SA unless otherwise noted.