Orbital, also known as War Games Map_Set/: 420-6,[1] is one of three maps in the Mythic map pack designed for Halo 3.[2] It was released on Xbox Live Marketplace with the two other Mythic maps on April 9, 2009.

Orbital takes place inside the docking-station for the Quito Space Tether, a Space elevator above South America that transports cargo and people in and out of the Earth's atmosphere easily.

It is said to be best for asymmetrical objective games, like Capture the Flag and Assault, but also has some natural deadlocks that makes Slayer interesting and Infection "terrifying." It's essentially two overlapping hallways in horseshoe shaped levels, so each team can see the other one's spawn through a window above or below them, but they are separated. Both bases of the map have operable doors that are important for objective games.[3] It is a two-story map, and one base is located at the end of the 2nd level hallway. The middle of the connecting horseshoes features a chasm which separates both sides, effectively forming a choke point that is crucial to hold.

The map contains plaques dedicated to Doctors Tobias Fleming Shaw and Wallace Fujikawa, the creators of the Shaw-Fujikawa Translight Engine. Orbital also contains many aesthetic elements, such as windows showing the Earth, electronic devices like display screens, escalators, and even a video phone. Overall the map has a feel of advanced technology.[4]

It was reported in a Bungie Weekly Update that one part of the map has a deadly chasm, which can be easily traversed once it is "unlocked." However, this seems to have changed since that information was released, long before the map was ever shown. Orbital has several such locks and switches "to disable and enable access to various parts of the map." However, the only switches currently found in the map are the two door switches in either base (that only open the doors, and do not close them). Currently, there is no way to open up other sections of the map. Orbital has been described as cleanly beautiful, yet haunting and having signs of abrupt abandonment. The map has two exits out of either base, plus a small maintenance hallway leading to the upper level. This makes defending on CTF interesting.

Battle Rifles are common throughout the level with two spawning on the starting bases of each side and another two near the middle of each side. Plasma Pistols are located on the bottom of the two escalators, Maulers are next to the equipment on the junctions, Plasma Grenades come in pairs scattered around the map, and a pair of Spikers are found in both hallways which connect the bases to the middle. There are also two Plasma Rifles located just next to the Rocket Launcher spawn. The two main power weapons on this map are the Sniper Rifle (on the lower side of the pit) and a Rocket Launcher (on the higher side), though it should be noted that both weapons have had their ammo decreased for balance.

There are two Mongooses on each base facing the operational doors (only closed in objective games), and a Ghost spawns at the attacking base during asymmetrical gametypes.

An escalator leading towards another chamber, and on the wall is the tribute to Tobias Fleming Shaw.

Another hallway with two Mongooses in sight.

A hallway with vegetation on the wall, as well as two information tubes displaying "Welcome" in several languages. 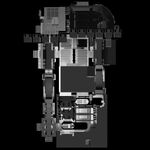 A Spartan-II passing by a window in Orbital.

A battle on Orbital.

A band of the Milky Way Galaxy, as seen from Orbital. 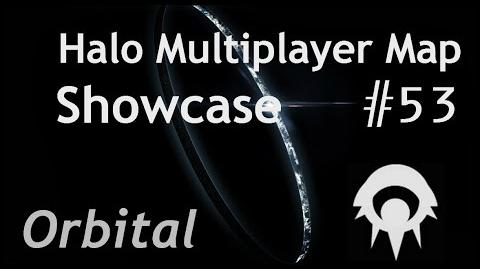 Français
Community content is available under CC-BY-SA unless otherwise noted.