“Saw a Spartan with an Overshield walk through crossfire that would have dismantled a tank.”
— Private Dave Moriarty[1]

An overshield is a form of Covenant-developed technology that strengthens the energy shielding system of the user.

The Overshield effectively triple the strength of any shielding system in Halo: Combat Evolved and Halo 2, and double in Halo 3, Halo 3: ODST, and Halo: Reach. The overshield can protect users from a direct fire of a Fuel Rod Gun, Sniper Rifles, Fragmentation Grenades and the Covenant Beam Rifle, and from indirect fire of a Rocket launchers and Plasma Grenades.

When the overshield is activated during Halo: Combat Evolved's Campaign mode, the overshield will continue to stay active until the user takes enough damage, enabling the user to make certain falls without injury

During the three seconds of charging directly after picking up the overshield, users are granted a brief moment of invincibility.

An overshield user is susceptible to an assassination. Due to its reductive nature, the overshield is only useful for a short period in multiplayer; the overshield slowly loses its strength over prolonged duration. Like the standard energy shield, the overshield can be fully depleted by an overcharged Plasma Pistol.

In Halo 2, Halo 3, Halo: Reach and Halo 4 the wearer is awarded a visual effect which gives off a full-body glowing effect. This visual effect negates the effects of a camouflage ability and makes the wearer more visible to other players, often drawing unwanted attention.

An Overshield in Halo: Combat Evolved.

An Overshield in Halo 2.

An Overshield in Halo 3.

An Overshield in Halo: Reach. 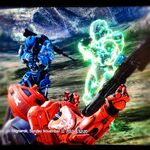 The Overshield, being used in Halo 4.

The Overshield as seen in Halo 2: Anniversary multiplayer.
Add a photo to this gallery

Retrieved from "https://halo.fandom.com/wiki/Overshield?oldid=1797528"
Community content is available under CC-BY-SA unless otherwise noted.