Combining both human structures and natural jungle environments, Pirth Outskirts is set on Pirth City, Arcadia, in a human environment (city) overlapped by jungle. The swampy outskirts of Arcadia's capital city features unclaimed bonus Reactors and offers alternate routes for attack. The area is open and easily navigated, even by the most cumbersome and powerful vehicle. Pirth Outskirts is a 1v1 map. 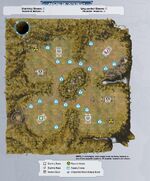 Strangely, Spirits are seen here, even though they can not be used in Multiplayer.