The Power Drain is an energy-sapping device used by Covenant Jiralhanae forces.

The Power Drain creates a short-range electromagnetic pulse (EMP) effect, which interferes with all electronic equipment within the radius of the pulse. It is designed primarily to interfere with common varieties of electrical field-based shielding, as well as the electrical components of vehicles. After a short time, the device overheats and explodes, which can wound or kill combatants in its resulting explosion.[2] The electricity it produces can also harm biological systems and cause damage to unshielded targets.

In combat, the Power Drain weakens shields that come within range of its EMP, and immobilizes any nearby vehicles.

Because it shares a similar design aesthetic to other examples of Jiralhanae technology, it is likely that this piece of equipment is of Brute manufacture. 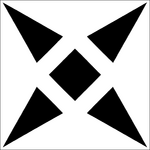 The Power Drain icon in Halo 3.

An inactive Power Drain in Halo 3.

The Power Drain emits a field of blue energy that strips away all energy shielding within its range.
Add a photo to this gallery

Retrieved from "https://halo.fandom.com/wiki/Power_Drain?oldid=1793073"
Community content is available under CC-BY-SA unless otherwise noted.