Dismantled at the end of the Human-Forerunner war

By approximately 150,000 BCE, Humanity had created a vast civilization, colonizing planets along the Orion Arm of the Milky Way galaxy.

After encountering the San'Shyuum, Humanity formed an alliance, based on the planet Charum Hakkor. At this point, Humanity's technological advancement rivaled that of the Forerunners, with the Humans using Precursor artifacts to support their structures and installations.[1]

This civilization encountered the Flood in approximately 110,000 BCE and, after discovering the parasite's true nature, went to war against it. After losing many planets, Humanity desperately invaded a minor sector of the Forerunners' domain. After forty-thousand years of expansion, the collective human genus waged war with the biologically-similar Forerunner species. After considerable bloodshed and the assistance of the San'Shyuum, the Flood were driven out of human occupied space and the few remaining Flood ships retreated out of the galaxy. However, as they had been stretched thin due to fighting two wars at once, the Humans were defeated at the hands of the Forerunners, led by the Ur-Didact.

The Humans were mistaken by the Forerunners to be aggressively expanding into their territory, attacking Forerunner worlds without reason. This was not the case as Humanity had been running and trying to get ahead of the Flood to stop it from spreading to further planets. At some point Humanity arrived at a Forerunner planet to "get ahead of the infection" although it was too late as there was already a small Flood infection outbreak on the planet. Without action this relatively small infestation would have spread and been far more difficult to contain and, as a result, the Lord of Admirals chose to attack the infection and the planet.[2] This act was seen by the Forerunners, specifically the Didact, as an attack on the Forerunners and so the Forerunners went to war with Humanity in an attempt to force them to "stand with the galaxy rather than against them."[3] Humanity and the Forerunners then went to war for years however Humanity had been exhausted fighting the Flood and by the time the Human-Flood war had been "won," Humanity had been pushed back to their capital world Charum Hakkor and had been completely cut off from any support. There, Humanity would wage a bitter war last stand lasting nearly 50 years against the Forerunners which ultimately caused the deaths of the Didact's children. After their defeat at Charum Hakkor, Humanity was reduced to a pre-technological state then exiled to their homeworld, Erde-Tyrene, where they were overseen by The Librarian and her life-workers.[4] This Forerunner victory proved disastrous for the galaxy, as the Humans destroyed all their research data and physical evidence concerning the Flood, including an apparent cure to stop the parasite. Bornstellar-Makes-Eternal-Lasting speculated it was Humanity's final act of vengeance to leave the Forerunners unprepared to face the incoming threat that led to the firing of the Halo array, Later the Didact would learn from a Gravemind that humanity did not have a cure but had been passed up by the Flood, revealing the true nature of the Flood and their far more sinister purpose. The Forerunners later learned after the defeat of Humanity that the reason for their aggression was due to them trying to stop the Flood, a foe which would later return to face them.

Forced to start again, the collective Homo genus tried in vain to reattain their former glory, with some Human communities establishing wooden cities and steam-powered waterborne vessels under the instructions of The Librarian. Most Humans, however, lived in Tier 7 tribal communities, such as the one that was encountered by the Forerunners during the construction of the portal to the Ark in eastern Africa. After the activation of the Halo Array, the Human civilization regressed once again, and would remain in a Tier 7 state for the next hundred millennia.[4]

As of the 26th century, most artifacts and records of this former civilization had been lost to time. However, ruins on the planet Heian appear to show hallmarks of Human design, suggesting that the planet was inhabited by ancient, space-faring Humans.[5][6]

The core system with Charum Hakkor had not been located by humans by 2557. Only scans of a monument above Sothra Hakkor had been found on Requiem. Though, the UNSC was skeptical of the information these scans provided.[7]

The Office of Naval Intelligence had discovered a damaged ancient human ship. Study of this ship fell under Project: ARC DREAM.[8]

Ancient humanity's empire was said to have originally spanned over a thousand systems and twenty thousand worlds.[9] 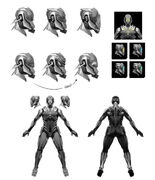 Designs of ancient human battleships.
Add a photo to this gallery

Lord of the Admirals Forthencho

Lord of the Admirals Forthencho conversing

Lord of Admirals looking at a Forerunner planet

Prehistoric human being struck by a Forerunner weapon.

Lord of the Admirals Forthencho at an old age

Regressed Humans being 'Composed' by the Ur-Didact

Retrieved from "https://halo.fandom.com/wiki/Prehistoric_human_civilization?oldid=1813300"
Community content is available under CC-BY-SA unless otherwise noted.