Prepare to Drop is the first campaign level of Halo 3: ODST. It does not contain actual gameplay, only the game's partially interactive opening cinematic that introduces Alpha-Nine.

View inside a ready room in the UNSC Say My Name. The Rookie sleeps in front of a drop pod in the foreground while Mickey, Dutch, and Romeo are around a large holo-table, on which a hologram of New Mombasa and the Prophet of Regret's assault carrier is displayed.

Romeo points at the Assault Carrier.

Sirens and lights begin to flare. A door into the room opens, and Gunnery Sergeant Edward Buck and Captain Veronica Dare enter.

The team cannot help but notice the attractive stranger with their commanding officer.

Buck glances at Dare and then looks sternly at the squad.

The ODSTs grab their gear and start walking to their pods.

Buck walks up to Dare.

Dare pokes Buck in the chest.

Dare brushes past Buck toward the pods. Buck sighs. Cut to the rest of the team, who are gearing up.

Romeo grabs an M90 Shotgun and offers it to Dutch.

Dutch shoves the shotgun away, glancing over Romeo's shoulder. Romeo turns to see Dare and Buck walk into the scene.

Buck takes the shotgun from Romeo's hands, puts it back onto the rack, and angrily shoves a sniper rifle into his hands instead.

Cut to the Rookie, still asleep next to his pod. Romeo walks to him and hits him with his sniper rifle's butt.

Cut to the Rookie's point of view as he wakes up.

Dutch hands an M7S SMG to the Rookie, who attaches it to his pod's weapon rack and positions himself on the seat. The pod's hatch closes, and the platform from which all the pods are hanging descends into the launch bay.

Once the hatch closes, the player is free to look around.

Buck and Dare appear on the pod's viewscreens.

The pod's screens flicker with static as the platform comes to a stop.

The pods drop away from the ship, punctuated by a countdown sound before the Rookie's pod detaches. His pod exits the launch bay to an expansive view of low Earth orbit. The tether of the New Mombasa Orbital Elevator can be seen in the background surrounded by multiple destroyed UNSC ships. Operational vessels prowl amongst the wreckage. A thick cloud cover below the pods stretches to the horizon.

The pods pass close to several destroyed Charon-class light frigates during their descent.

The pods reach the cloud layer.

The screen flashes white as the Rookie's pod falls through the cloud layer. The city of New Mombasa and the Assault Carrier above it come into view.

The squad's pods veer off to a new course.

A stream of energy flickers across the carrier's hull.

A slipspace rupture opens before the carrier and rapidly expands, creating a crater on the ground below it.

The UNSC In Amber Clad can be seen moving towards the carrier.

Dare is cut off as the carrier disappears into the rupture, taking In Amber Clad with it and releasing a massive explosion and shockwave.

Mickey's pod slams into the Rookie's, cracking the window. Inside the pod, all screens turn red with warnings before the EMP fries the pod's systems. The Rookie grabs onto a handhold as his pod plummets into freefall without a chute to slow it. {Screen goes black} 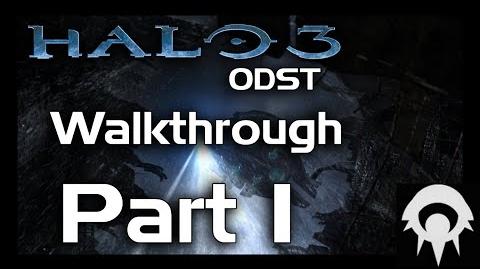 The view from The Rookie's Pod during the drop