Prologue is the opening cutscene of Halo 4, which shows Dr. Halsey being interrogated by a shadowy figure about the SPARTAN-II program, specifically John-117.

Open on a line of beds. They are made of plastic, with no sheets, and are enclosed by glass walls. Children inside them are sleeping. Pan to a boy sitting on one of the beds. His head is shaved and he wears a grey uniform that reads "John." He looks up at his viewer, his eyes showing fear and want of sympathy.

Fade in to a closeup of Halsey's eyes. She seems tired and grave.

The interrogator, who is framed in shadow, sits at the other end of their table.

Halsey looks at her speaker defiantly. He is framed in shadow.

Cut to John-117, now wearing a breath mask, lying down on the bed as machines prepare to operate on him.

Cut to a SPARTAN-II, now fully armored and being inspected by technicians. He towers over all of them.

Cut to a CAS-class assault carrier hovering over a human city. Hundreds of aircraft fly out of its launch bay.

Cut back to the interrogation.

Banshees bomb the city as civilians runs for their lives.

A Sangheili drives his energy sword through a fleeing civilian.

From up in the sky, a dozen Spartans drop from Pelicans, using their thruster packs to slow their descent.

The Spartans land. An Elite snarls aggressively at them. The Spartans take cover and shoot down some of the Sangheili who return fire, flaring the shields on the Spartans' armor, while the lead Elite calmly steps forward and fires back. Cut to the Spartans moving forward, still firing.

Cut to Halsey, who sits forward calmly, clasping her hands.

Halsey looks at him worriedly, as the interrogator, now standing, backs away from the table.

Cut to a Spartan sitting alone in a hangar. His head is drooped and he is speaking to no one. Marines walk past him.

Cut to a Spartan fighting a Jiralhanae Chieftain. He leaps agilely, dodging its every blow. Dead Sangheili cover the ground around them.

Cut back to the interrogation.

Cut to a Spartan's foot stepping down on a puddle. The Spartan leads a crowd of military personnel. The fighting has stopped but the city is clouded in smoke.

Halsey stands up from her chair in determination.

A SPARTAN-II fighting a Brute Chieftain.

John-117 and Cortana meeting for the first time. 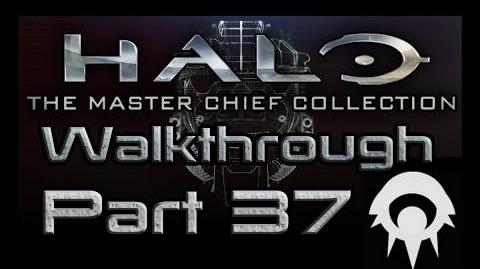 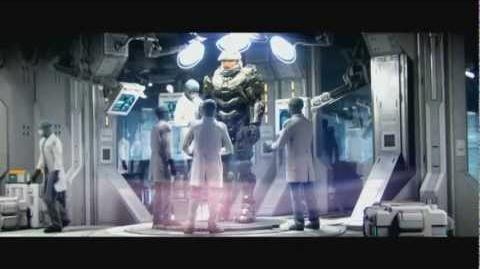