The Pummel medal (Bone Cracker in Halo 2, Beat Down in Halo 3 and Melee in Halo 4) is awarded for killing an opponent with a melee attack that does not assassinate him (a melee attack from behind). It is available in all Multiplayer gametypes and has a Bungie difficulty rating of 3 out of 10. [citation needed]

It is represented by an inverted silver star with a dark green fist. After you kill an opponent with a melee attack, a message appears on your screen that says: "You beat down (player's name)." It is also awarded if a Covenant Energy Sword or Gravity Hammer is used to kill an opponent. In Halo: Reach, after killing an opponent with a melee attack, the message "You pummeled (player's name)" will appear. 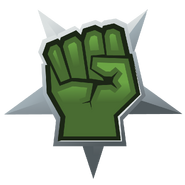 The medal in Halo: Reach.
Add a photo to this gallery

Retrieved from "https://halo.fandom.com/wiki/Pummel_medal?oldid=1801479"
Community content is available under CC-BY-SA unless otherwise noted.