Varies on type of Form

Vary based on the type of form, but they all have the distinctive Flood greenish-grey skin

Varies on type of Form

The Pure Form is a type of Flood first featured in the Halo 3 level Floodgate.

As implied by their name, the Pure Forms are not the products of infecting a biological host, but are instead composed entirely of Flood biomass. Because they employ a calcium-based exoskeleton for protection, these forms are significantly more resilient than the conventional Flood forms encountered in the first two Halo games. Genetically, they are composed of the same Flood "super-cell" which infects and transforms all other victims of the Parasite, but are made up entirely of recycled bones, muscles and other biomass collected by the Flood, rather than reanimated corpses.

Stalker forms are extremely agile and can jump large distances. They tend to crawl on ceilings and walls before leaping at an opposing enemy. Stalkers attack far more rarely than the other two forms, eschewing prolonged combat in favor of hit-and-run tactics or moving to a safe distance from the player, where it will either become a Tank or Ranged form. They attack with their claws, though they will employ hit-and-run tactics most of the time. You can get the assassin circle (when you attack an enemy from behind and they do not notice), when they run back.

Ranged Forms can usually be found clinging to ceilings or walls, though unlike the Stalker Form, they cannot move from a given spot. They can fire sharp projectiles without the need of a weapon. These are slightly more tricky to kill due mainly to the fact that they can pin an enemy down in a position for a very long time. If they are left alone for some time, they will change back into a Stalker Form, get a better angle, and become a Ranged Form again. They will also transform if you get too close to them. Their special ability is lowering their spines to create cover, making it harder for players to kill them.

Tank Forms are the largest form of Flood and are easily spotted from a distance. Unlike the other Flood Pure Forms, they can not climb on walls and ceilings. These Flood can take a tremendous amount of damage and can kill you in one hit on higher difficulties. They also occasionally spew Infection Forms from their 'mouths'. It takes a long time to kill one with other weapons, but the Energy Sword can kill them in one hit.

The Infector is a three-limbed form that features the ability to regenerate destroyed limbs within ten seconds, making it a formidable foe. Their bodies are very similar in appearance to the Carrier Form, except that the infector form is designed to shoot out spores, not explode and release infection forms. It was cut from the final game.

The Flood Transport Form was a Flood Purestrain form. Unlike the Carrier Form, the Transport carries up to six unarmed Combat Forms. It had four triple-jointed walking arms to move its load of troops around, and featured numerous tentacles to consume or recycle bio-mass. It was cut from the final game.

Like the Stalker Form, it excelled in the art of stealth to defeat the enemy. It was the only Pure Form to be able to use weapons with the aid of two four-tentacled hands. It was cut out from the final game. 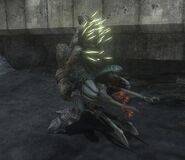