Labyrinthine, UNSC Base, Concrete and Metal

Rat's Nest is a large indoor map that resembles an area from the campaign level Crow's Nest, with internal vehicle accessible roads, tight corridors, walkways suspended above areas and vents. In the distance, Pelicans and Hornets pass by. It was used by the UNSC as a weapons, fuel and ammunition storage facility up until the Battle of Crow's Nest.

On November 19, 2007, Microsoft released information regarding the first Halo 3 Heroic map pack.[4] Rat's Nest is one of the maps included in this bundle. The map pack retailed for 800 Microsoft Points ($10 USD), and was released on December 11, 2007. However as of March 25, 2008 the Heroic map pack is free of charge to all Xbox Live Members.

This map is, essentially, a big figure 8 track (note, a digital 8, meaning vehicles must turn 90 degrees to cross straight from one side to the next). The map is extremely open and vehicle-based around its perimeter and center, with close combat and medium sized rooms everywhere else. It has two Warthogs and Mongooses parked outside of both bases. Small rooms connect each base. Around the edge of the map there is a small outdoor road.

On the upper road there is a Ghost and Sniper Rifle. Below the upper road, an Active Camo and past that, A Gravity Hammer.Above that is a machine gun turret providing a commanding but exposed view. The Rocket launcher is by the cliff. A Pelican is positioned on a landing platform visible from the track, but it is unusable and inaccessible due to death barriers. The Pelicans and Hornets that fly by in the distance can be shot down with a Spartan Laser.

The main road along the cliff.

The Pelican parked on the landing pad outside Rat's Nest. 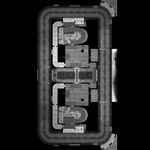 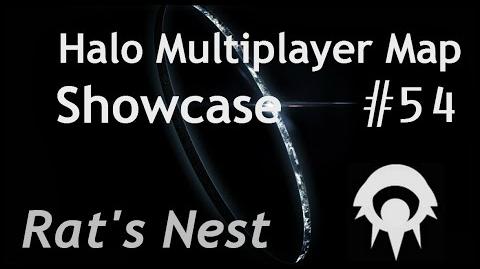