Rat Race is a multiplayer map in Halo: Combat Evolved and in Halo Custom Edition.

It is a sort of circular map, with a multitude of Teleporters, tunnels and passages.

The most notable feature of the map is the central section of elevated tunnels. There are two entrances to this complex, one by a teleporter and one by an inclined ramp. The strategic value lies in the two exit points which allow a player to drop unexpectedly from the ceiling through a wide hole into the enemy section of the base. Since this is strictly a one-way vector of attack and jumping down this hole usually entails grabbing an Active camouflage or Overshield power-up, defenders are forced to keep an eye to the ceiling.

Although the Bungie.net description claims that it is a UNSC attempt to mine into the surface of a section of Halo Installation 04,[1] the fact that they had only 2 or 3 days to set it up makes it difficult to confirm with known facts. Likewise, it is not known where they would have found the equipment necessary, or the time to do this.

King of the Hill (Team)Edit

The Shield area of the map

A part of the map

A CTF game on the map 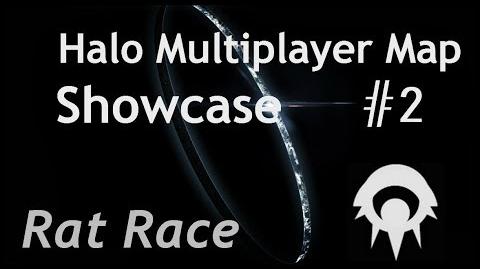 Retrieved from "https://halo.fandom.com/wiki/Rat_Race?oldid=1793248"
Community content is available under CC-BY-SA unless otherwise noted.