Reclaimer is the fifth campaign level of Halo 4. It was first announced along with the rest of the achievements for Halo 4.[1]

Reclaimer includes the first appearance of the Mammoth vehicle, the Lich dropship, and The Librarian. It starts off when the player is dropped off by a Pelican. Throughout the level you will be guiding the Mammoth through the battlefield so it can destroy the cannons guarding the gravity well.

Fade from black. Captain Andrew Del Rio surveys Requiem's surface from the window of Infinity's bridge. Two Broadsword fighters pass overhead, disappearing along the horizon. He gazes around the bridge for a brief moment and walks over to the holodeck. The hologram depicts a Pelican flying through a desert canyon. Del Rio proceeds to address the ground teams.

Cut to said Pelican, flying through the canyon.

Scene transitions to the interior of the Pelican. The Master Chief, marines and two Spartan-IVs observe a holographic display of Del Rio as he speaks.

An image of a particle cannon appears next to Del Rio.

The Pelican prepares to land, and John turns to the door as it opens. The marines and Spartan-IVs form-up behind him.

The Pelican drops the Chief next to a cliff face. The surrounding area is arid and sandy; almost devoid of foliage. A small tunnel, guarded by two marines, cuts through the rock.

John makes his way through the tunnel. Upon exiting the cave, the Mammoth, a behemoth of firepower equipped with a MAC cannon and rocket turrets, towers overhead.

The Chief proceeds to board the Mammoth and finds Lasky at the fore of the vehicle on the uppermost level.

John grabs a jetpack near the aft.

The Mammoth begins to move.

The Mammoth treks along the side of a sheer cliff. Three Pelicans fly just ahead of the Mammoth.

The Mammoth rounds the bend. A large Forerunner construct floats in the distance. The particle cannon begins to initiate the firing sequence.

The cannon fires with resounding force. Two Pelicans are instantly vaporized, while the third goes down in flames from a glancing blow.

John and the infantry onboard the Mammoth clear the enemies from a high vantage point and press forward towards the crashsite.

A Covenant Phantom converges on the crashsite.

Chief exits the Mammoth and clears the hostiles surrounding the surviving Pelican forces. John picks up the target designator.

The Cheif paints the target. Meanwhile, Covenant reinforcements, including a Wraith, assault the ground forces.

The mini-MAC fires upon and destroys the Phantom.

John eliminates the remaining enemies in the area.

The Master Chief targets the particle cannon and the mini-MAC fires.

John makes his way back aboard the Mammoth and then is underway.

The Mammoth continues onward, but two Phantoms along with several Banshees begin attacking.

Eventually, Covenant air-support is cleared from the area. The Mammoth veers away from the cliff edge and continues down a wide canyon.

John manages to bring down the first power source.

The second power source is destroyed.

The third and final power source is destroyed.

As the Chief proceeds to the next area, the Mammoth follows. The second particle cannon is visible on the far end of the canyon.

The Chief paints the particle cannon.

A Phantom approaches, followed by a Lich dropship.

The Lich fires upon the Mammoth, disabling it. Meanwhile, several Phantoms drop in Ghosts and a Wraith.

The Chief clears all immediate threats.

Phantoms drop in more Ghosts and Wraiths. Once the Wraiths are destroyed, the Lich moves position.

The Chief fights his way up the mesa, arriving at the gravity lift into the Lich. Once inside, he eliminates the Covenant crew and destroys the power core.

The Chief leaps from the damaged Lich, landing on the ground. The Lich drifts aimlessly out over the ocean, finally exploding.

The Chief boards the Mammoth, and it begins moving towards the next objective. (previous dialogues will play if the Chief jumps from the Lich and lands on the Mammoth, causing it to move again.)

The Mammoth reaches a series of waterfalls and comes to a stop.

As the Mammoth begins moving again, the Chief's HUD flickers as Cortana experiences another rampant episode.

The Mammoth rounds a corner, coming to a dead-end. A small path leads up to a Forerunner structure to the right.

As the Chief rounds the corner of the trench, a Promethean Knight appears on a ledge at the far end of the area.

The Chief proceeds through the trench and fights his way past Covenant and Promethean forces. As the Forerunner structure comes into view, the Chief makes his way inside.

The Chief makes his way through the facility, a Sentinel leading the way. It opens a door to an elevator and the Chief steps on.

More Sentinels lead the Chief through the lower levels of the facility, taking him to the controls for the particle cannons.

The Chief proceeds, plugging Cortana into the console ahead.

Cortana shuts the cannons down.

Cortana disappears from the console.

As the Chief makes his way back, a hardlight bridge appears on the left. The Chief follows a series of tight corridors, arriving to find five Sentinels waiting by a door. The door opens as he approaches, a beam of blue light with Cortana standing inside waits on the other side. As he steps into it, the screen washes to white.

The Chief holds a hand up, trying to see through the shine of Requiem's artificial sun. A figure descends from above towards him.

A low rumbling is heard.

Behind the Librarian, platforms rise from the clouds, Promethean Knights perched atop them.

The Chief's body glows with energy as the Librarian accelerates his evolution. Not soon after he is beset upon by Forerunner forces. Cortana appears on a pedestal to his left.

The Chief fights his way to the elevator, boarding and taking it down."

The elevator comes to a stop, a portal to exit the facility waiting for the Chief. As he steps through it, the Chief is instantly taken to a battlefield outside the gravity well.

The Gravity of the Situation

The Chief fights his way up the hill towards the gravity well.

The convoy destroys the first line of Covenant.

The Chief comes to a Covenant shield blocking the way to the gravity well.

Off to the left, the Chief approaches two shielded generators powering the large shield. He destroys the first one.

The Chief destroys the second generator.

The Chief makes his way to the gravity well. As it comes into sight the Chief moves towards the target designator that lies in wait.

The Chief picks up the target designator and paints the gravity well.

Cut to the camera on Infinity's fired projectile. It hits the gravity well, destroying it with a clean shot. Cut to John as he watches the gravity well explode before walking off. Fade to black.

Screen fades to Infinity's ship in flight, then inside with Master Chief, Cortana, Del Rio, Lasky, and Palmer

Del Rio pauses and looks at Lasky with disgust.

The room begins to shake and everyone looks up as Cortana flashes red with anger.

As Cortana finishes her sentence, she releases a burst of energy and then expresses regret.

Lasky reaches for the chip but the Master Chief cuts him off and takes the chip.

The Master Chief puts the chip into his helmet.

The Master Chief stands up to Del Rio's face.

Del Rio furiously stands back and looks at Palmer and points at the Chief.

Lasky nods at the Chief. The Chief walks away as Del Rio and Lasky stand and stare at him.

John standing on a battlefield. Note the UH-144 Falcons up near the Infinity.

The Mammoth and a Warthog.

One of the particle cannons. 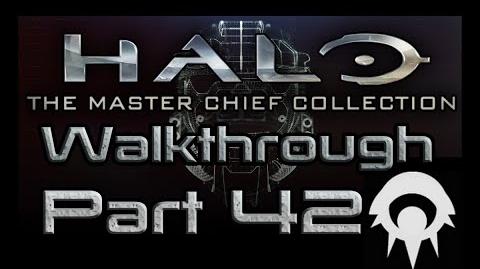