Building interior with an Oriental/Zen-like theme

Reflection is a multiplayer map in Halo: Reach, set in the Sinoviet HM Tower in New Alexandria.[2] It is a direct remake of the popular Halo 2 map Ivory Tower.[3]

While Reflection's map geometry, weapon placements and spawns are identical to those of Ivory Tower, the map has a new aesthetic design that abandons the more minimalist look of the original in favor of a more detailed Oriental theme.[3] Reflection is set inside the Sinoviet tower New Alexandria on the planet Reach. Prominent materials in the building include metal and marble, as well as warm wood floors polished to a high gloss finish. A Zen garden features prominently in the building's central space, and several koi ponds grace the halls. The rooms have massive glass windows, with a view of the mountains outside. The Chinese/Japanese kanji characters for North(HOKU / kita), South(NAN / minami), East(TOU / higashi) and West(SAI / SEI / nishi) can be seen higher up on the walls in gold. A turning hologram of the planet Reach is suspended above the central hall. 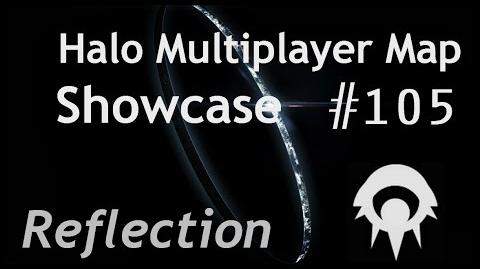 King of the Hill being played on Reflection.

A player dodging a rocket from a Rocket Launcher.

A blue player sniping from the High Balcony.

A Koi fish found in the ponds throughout the map.

A picture of both Reflection and Ivory Tower.