Release is a Multiplayer map for Halo Wars, most likely set on the Flood-controlled Shield World.

The Containment Facility has failed, allowing the Flood to infest the facility for "thousands of years" before the events of Halo Wars. The environment is described as Flood-dominated, and undefended scouting parties will quickly be infected. The map has two "control panels" that players can use as biological weapons, unleashing hordes of captive Flood on the enemy for 300 resources, although it increases by 300 more every time you use it. This is an extremely risky move, as the Flood can turn against the player as well, so make sure you have enough troops to manage such a large infestation.[1] 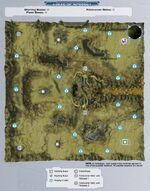 A strategic map of Release.

UNSC forces engaging Flood
Add a photo to this gallery

Retrieved from "https://halo.fandom.com/wiki/Release?oldid=1809997"
Community content is available under CC-BY-SA unless otherwise noted.