The map is set on a large island on Installation 05 with the remains of a Forerunner vessel sticking out of the ground.[1] Some consider it to be a counterpart of Halo: Combat Evolved's campaign level The Silent Cartographer. It also resembles a smaller version of Halo PC's Death Island. Due to its design, it is best played using one flag/bomb CTF/Assault variants.

The map itself features the Sniper Rifle and Beam Rifle, as well as the Deployable lookout towers used by Jackals.

There is a two-way Teleporter that can be activated from inside the basement of the building, though the inside Teleporter can be used prior to its activation by jumping, firing a rocket launcher at it, and landing on it—or, more simply, by Crouch jumping.

There is also a Covenant Deployable sniper tower, with a Beam Rifle lying at its base. This tower can be toppled using explosive weapons or certain vehicles, such as the Gauss Warthog. Despite this, the tower can be an amazingly helpful weapon for such a large map.

There is also a Sniper Rifle located near the back of the Albatross. Two more fantastic weapons are the Energy Sword and the Shotgun, both of which are located near the center locale of the map, under the Forerunner building. The Rocket launcher is located by some broken walls on the far side of the island. Control over these weapons generally translates into control over the outcome of the game.

It is, oddly enough, one of the few maps in which the flags in a CTF game mode are not on opposite ends of the map or in any symmetrical pattern. This makes for unusual gameplay.

A view of the island.

An overview of Relic. 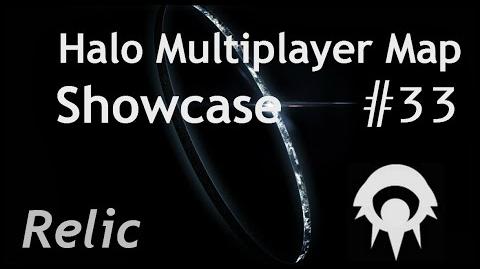