Repository is designed to be a 2v2 map. It is set on an unknown Forerunner construct.

Rather than being occupied by the usual Rebel bases, the four possible base locations are held by equally powerful Forerunner forts, which are protected by Sentinels, laser turrets, and a solid-light barrier shield. Other Forerunner elements are spread throughout the map, including a Sentinel Factory located directly in the center of the map on top of a large circular Forerunner structure, linked to the surrounding land by four Forerunner bridges.

It is understandably common that many players will fight over the center of the map for this Sentinel Factory. Also, there are sentinels randomly placed around the map (meaning not defending any structures), that will ambush any player's units, which may slightly hamper offensive operations. 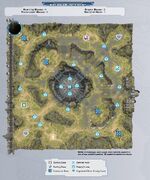 A strategic map of Repository

Prerelease screenshot of Repository
Add a photo to this gallery

Retrieved from "https://halo.fandom.com/wiki/Repository?oldid=1726181"
Community content is available under CC-BY-SA unless otherwise noted.